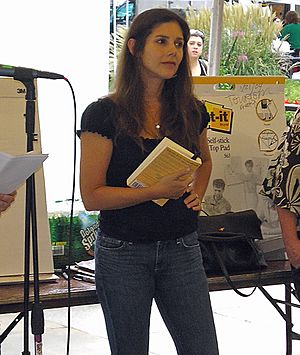 Ann Brashares (born July 30, 1967) is an American young adult novelist. She is best known as the author of The Sisterhood of the Traveling Pants series.

Brashares was born in Alexandria, Virginia, and grew up in Chevy Chase, Maryland, with her three brothers. She attended elementary and high school at the Sidwell Friends School in Washington, D.C. After studying philosophy at Barnard College, she worked as an editor for 17th Street Productions. 17th Street was acquired by Alloy Entertainment, and following the acquisition she worked briefly for Alloy.

Brashares mainly writes for young adults. Besides the Sisterhood series and its two companion books, 3 Willows and Sisterhood Everlasting, she has contributed two 80-page biographies to the nonfiction book series Techies and has published two standalone novels for adults. She won the Indies Choice Book Award for Children's Literature in 2002, and won the Quill Award for Young teen/adult in 2005.

All content from Kiddle encyclopedia articles (including the article images and facts) can be freely used under Attribution-ShareAlike license, unless stated otherwise. Cite this article:
Ann Brashares Facts for Kids. Kiddle Encyclopedia.