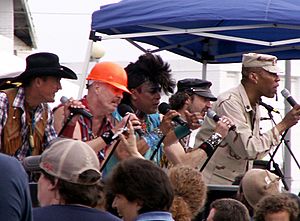 The Village People is an American disco group. They are known for suggestive lyrics, onstage costumes and some very catchy tunes. The group was originally formed by French producers Jacques Morali, Henri Belolo and lead singer Victor Willis. That was after the release of their first album Village People. The album targeted disco's largely homosexual audience. The group's name refers to Manhattan's Greenwich Village. That area has a reputation as a gay village.

All content from Kiddle encyclopedia articles (including the article images and facts) can be freely used under Attribution-ShareAlike license, unless stated otherwise. Cite this article:
Village People Facts for Kids. Kiddle Encyclopedia.