Point O' Woods is a hamlet that consists of a private vacation retreat on Fire Island, New York, United States. Although it resembles a village or small town, with services such as a ferry port, a general store, church and fire department, the private community is open exclusively to members and their guests, who are the only persons allowed in through the hamlet's gate, or allowed to use the private ferry that runs to Point O' Woods from Bay Shore, New York. 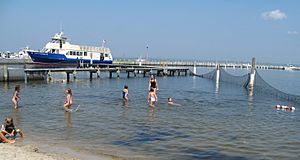 Point O' Woods is located between Ocean Bay Park and Cherry Grove; immediately to the east is the Sunken Forest, a park situated below mean high tide level.

Point O' Woods is not a municipality and has no government as such. Like a few other Fire Island enclaves, it is a privately owned parcel of land. It lies under the political jurisdiction of Brookhaven Township in Suffolk County; local law enforcement is the duty of Suffolk County Police Department's Marine Bureau. The beaches themselves, however, are (a) open to the public, and (b) regularly patrolled by state and local police as well as by the National Park Service and US Coast Guard.

It is said to have been the first settlement on Fire Island, though Cherry Grove also makes that claim. It was originally organized in 1894 for religious retreats, some from the Chautauqua assemblies. In approximately 1898, the Chautauqua group went bankrupt, and ownership passed to the Point O' Woods Association, which administers it today.

Today Point O' Woods serves as a summer vacation retreat for Association members and their families. This vacation spot has many people from the East coast, but also from the West coast. The hamlet is opened by the Association in the mid-Spring, and closed in early autumn each year.

As on much of Fire Island, cars are not permitted in Point O' Woods and bicycles are the principal means of wheeled transport. Despite this restriction, the community uses its private railroad, a half-mile long, 3 ft (914 mm) narrow gauge line to transport freight from the dock to key buildings in the town. It is not used for passenger service. In addition, the community uses a small number of motor vehicles for maintenance, recycling and pest control.

Essentially a village-sized private club, Point O' Woods is famous for its insularity and exclusivity. The hundred-plus homes are technically owned by the Association, which then offers long-term leases to the members who reside in them. Many members' families have summered there for generations.

The hamlet is separated from its nearest western neighbor, Ocean Bay Park, by a six-foot chain-link barrier known simply as "the Fence." The Sunken Forest serves as a natural barrier to the East. Tourists are not welcome; the ferry from Bay Shore, L.I., is privately owned and uninvited visitors who board may well be met by an Association member when they arrive at the Point O' Woods dock.

Point O' Woods has its own church and volunteer fire department, and until Nat Hentoff's complaint (described below), a post office.

Its insularity and tight restrictions have permitted Point O' Woods to preclude the commercial development and expansion that has affected the rest of Fire Island; it is still well known for its peaceful atmosphere, safe environment and its family orientation.

The Wreck of the Elizabeth

On July 19, 1850 the English barque Elizabeth sank after running aground on the Fire Island sandbar just off of Point O' Woods. Famed feminist author Margaret Fuller perished in the wreck along with her infant child. Three days after the sinking, Fuller's friend Henry David Thoreau arrived at Point O' Woods to search for her remains. Her body was never recovered.

Essentially a village-sized private club, Point O' Woods is noted for its insularity and exclusivity. The land on which the cottages are built are technically owned by the association, which offers long-term leases to the members who reside in them. Many members' families have summered there for generations.

As on much of Fire Island, cars are not permitted in Point O' Woods and bicycles are the principal means of wheeled transport. The community uses its private railroad, a half-mile long, 3 ft (914 mm) narrow gauge line to transport freight from the dock to key buildings in the community. It is not used for passenger service. In addition, the community operates a small fleet of motor vehicles to conduct maintenance, recycling and pest control.

Point O' Woods has its own church and volunteer fire department. It operated a post office until journalist Nat Hentoff, who was not a member of the community, protested because club rules denied him access to the federally funded U.S. post office located within the Point O' Woods grounds. Eventually, the hamlet resolved the dispute by giving up its federal post office; it now has no separate ZIP Code. Mail is delivered to the Bay Shore Post Office by the United States Postal Service and taken by ferry to Point O' Woods, where it is distributed privately.

All content from Kiddle encyclopedia articles (including the article images and facts) can be freely used under Attribution-ShareAlike license, unless stated otherwise. Cite this article:
Point O' Woods, New York Facts for Kids. Kiddle Encyclopedia.