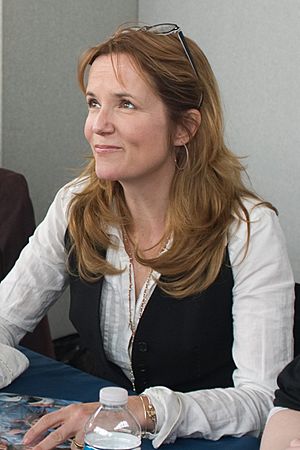 Lea Thompson (born May 31, 1961) is an American actress. Her notable acting roles were in the 1983 movie All the Right Moves and the 1990s sitcom Caroline in the City. She also starred in many made for television movies. Thompson was born in Rochester, Minnesota. She had planned on becoming a professional ballerina. In fact, both her and her older brother Andrew Thompson took ballet classes throughout their youth. Both went on to dance with major dance companies--Andrew with the Colorado Ballet and Lea with the American Ballet Theatre. After Lea acquired numerous accumulating injuries and was told she didn't have the ideal body, she left professional ballet in favor of an acting career.

All content from Kiddle encyclopedia articles (including the article images and facts) can be freely used under Attribution-ShareAlike license, unless stated otherwise. Cite this article:
Lea Thompson Facts for Kids. Kiddle Encyclopedia.