The Fire Island Lighthouse is a visible landmark on the Great South Bay, in southern Suffolk County, New York on the western end of Fire Island, a barrier island off the southern coast of Long Island. The lighthouse is located within Fire Island National Seashore and just to the east of Robert Moses State Park. It is part of the Fire Island Light Station which contains the light, keepers quarters, the lens building containing the original first-order Fresnel lens, and a boat house. 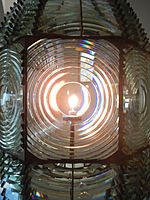 The current lighthouse is a 180-foot (55 m) stone tower that began operation in 1858 to replace the 74-foot (23 m) tower originally built in 1826. The United States Coast Guard decommissioned the light in 1974. In 1982 the Fire Island Lighthouse Preservation Society (FILPS) was formed to preserve the lighthouse. FILPS raised over $1.2 million to restore the tower and light. On May 25, 1986 the United States Coast Guard returned the Fire Island Lighthouse to an active aid to navigation. On February 22, 2006, the light became a private aid to navigation. It continues to be on the nautical charts, but is operated and maintained by the Fire Island Lighthouse Preservation Society and not the USCG. It was added to the National Register of Historic Places in 1981 and a boundary increase for the national historic district occurred in 2010.

It is listed as Fire Island Light, number 695, in the USCG light lists.

The Archives Center at the Smithsonian National Museum of American History has a collection (#1055) of souvenir postcards of lighthouses and has digitized 272 of these and made them available online. These include postcards of Fire Island Light with links to customized nautical charts provided by National Oceanographic and Atmospheric Administration. 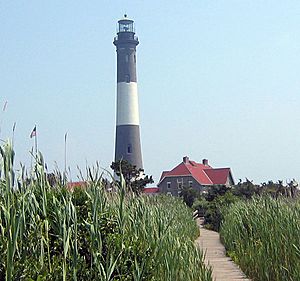 The lighthouse can be accessed by a short walk from Robert Moses State Park – Field 5. It is open to the public daily. Tower tours are available for a small fee.

All content from Kiddle encyclopedia articles (including the article images and facts) can be freely used under Attribution-ShareAlike license, unless stated otherwise. Cite this article:
Fire Island Lighthouse Facts for Kids. Kiddle Encyclopedia.