Marblehead is a coastal New England town in Essex County, Massachusetts. Its population was 19,808 at the 2010 census. It is home to the Marblehead Neck Wildlife Sanctuary, Crocker Park, the Marblehead Lighthouse, Fort Sewall, Little Harbor and Devereux Beach. Archibald Willard's famous painting The Spirit of '76 currently resides in Abbot Hall.

A town with roots in commercial fishing, whaling and yachting, Marblehead was a major shipyard and is often referred to as the birthplace of the American Navy, a title sometimes disputed with nearby Beverly. It is also the origin of Marine Corps Aviation. A center of recreational boating, it is a popular sailing, kayaking and fishing destination. Several yacht clubs were established here in the late 19th century, which continue to be centers of sailing. 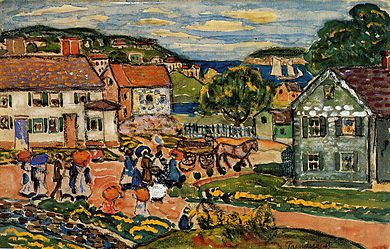 Marblehead's first European settler was Joseph Doliber in 1629, who set up on the shore near what is now the end of Bradlee Road.

Three years earlier, Isaac Allerton, a Pilgrim from the Mayflower, had arrived in the area and established a fishing village at mid-Marblehead Harbor on the town side, across from Marblehead Neck. This area was set off and incorporated separately in 1649. Originally called Massebequash after the river which ran between it and Salem, the land was inhabited by the Naumkeag tribe of the Pawtucket confederation under the overall sachem Nanepashemet. But epidemics in 1615–1619 and 1633, believed to be smallpox, devastated the tribe. On September 16, 1684, heirs of Nanepashemet sold their 3,700 acres (15 km2); the deed is preserved today at Abbot Hall in the city.

At times called "Marvell Head", "Marble Harbour" (by Captain John Smith) and "Foy" (by immigrants from Fowey, Cornwall), the town would be named "Marblehead" by settlers who mistook its granite ledges for marble. It began as a fishing village with narrow, crooked streets, and developed inland from the harbor. The shoreline smelled of drying fish, typically cod. These were exported abroad and to Salem. The town peaked economically just prior to the Revolution, as locally financed privateering vessels sought bounty from large European ships. Much early architecture survives from the era, including the Jeremiah Lee Mansion. 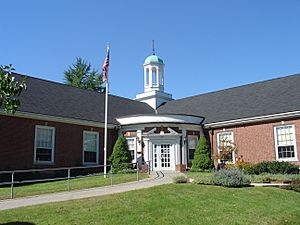 A large percentage of residents became involved early in the Revolutionary War, and the sailors of Marblehead are generally recognized by scholars as forerunners of the United States Navy. The first vessel commissioned for the navy, Hannah, was equipped with cannons, rope, provision (including the indigenous molasses/sea water cookie known as "Joe Frogger" )—and a crew from Marblehead. With their nautical backgrounds, soldiers from Marblehead under General John Glover were instrumental in the escape of the Continental Army after the Battle of Long Island. Marblehead men ferried George Washington across the Delaware River for his attack on Trenton. Many who set out for war, however, did not return, leaving the town with 459 widows and 865 orphaned children in a population of less than 5,000.

The community lost a substantial portion of its population and economy, although it was still the tenth-largest inhabited location in the United States at the first census, in 1790. When George Washington visited the town during his presidential tour of 1789, he knew the sailors of Marblehead well; they had served him honorably in the war. He observed that the town "had the appearance of antiquity."

At the beginning of the 19th century, wealthier citizens wanted a new bank to finance vessels, and to serve the town’s fishermen and merchants. On March 17, 1831, with a capital of $100,000, they founded the Grand Bank. The name was changed to National Grand Bank on October 3, 1864.

After the Revolution, fishing continued as a major industry. The town's fishermen had 98 vessels (95 of which exceeded 50 tons) putting to sea in 1837, where they often harvested fish off the Grand Banks of Newfoundland. However, a gale or hurricane in that area on September 19, 1846, sank 11 vessels and damaged others. With 65 men and boys lost in the storm, the town's fishing industry began a decline. The storm is depicted in Fireboard: The Great Gale of 1846, c. 1850 by William Thompson Bartoll. A copy of the book is held by the Peabody Essex Museum.

After World War II, the town enjoyed a population boom, developing as a bedroom community for nearby Boston, Lynn, and Salem. This boom ended around 1970, when the town became built out.

Marblehead town officials recently banned fishing off all public piers due to overcrowding. This ban was lifted after town officials approved regulations aimed at preventing the problem. 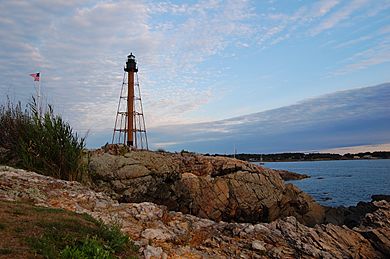 Marblehead Light, at the northern tip of Marblehead Neck

Marblehead is located at 42°29′49″N 70°51′47″W﻿ / ﻿42.49694°N 70.86306°W﻿ / 42.49694; -70.86306 (42.497146, −70.863236). According to the United States Census Bureau, the town has a total area of 19.6 square miles (50.7 km2), of which 4.4 square miles (11.4 km2) is land and 15.2 square miles (39.4 km2), or 77.61%, is water. Marblehead is situated on the North Shore of Massachusetts along Massachusetts Bay and Salem Harbor. The town consists of a rocky peninsula that extends into the bay, with an additional neck to the east connected by a long sandbar. This ring of land defines Marblehead's deep, sheltered harbor. Marblehead Neck is home to a bird sanctuary, as well as Castle Rock and Chandler Hovey Park at its northern tip, where Marblehead Light is located. The town was once home to two forts, Fort Miller at Naugus Head along Salem Harbor, and Fort Sewall, at the western edge of the mouth of Marblehead Harbor. The town land also includes several small islands in Massachusetts Bay and Dolliber Cove, the area between Peaches Point and Fort Sewall. The town is partially divided from Salem by the Forest River, and is also home to several small ponds. Keeping with the town's location, there are four beaches (one in Dolliber Cove, one in Marblehead Harbor, and two along the southern shore of town), as well as six yacht clubs, one public kayaking center and several boat ramps.

Besides Marblehead Neck, there are three other villages within town, Old Town to the southeast and Clifton to the southwest. Given its small area, most of the residential land in town is thickly settled. Marblehead's town center is located approximately 4 miles (6 km) from the center of Salem, 16 miles (26 km) northeast of Boston and 12 miles (19 km) southwest of Cape Ann. It is bordered by Swampscott to the south and Salem to the northwest. (Because Salem's water rights extend into Massachusetts Bay, there is no connection between Marblehead and the city of Beverly across Beverly Harbor.)

Marblehead is home to the eastern termini of Massachusetts Route 114 and Route 129, which both terminate at the intersection of Atlantic and Ocean avenues. Route 114 heads west into Salem, while Route 129 heads south along Atlantic Avenue into Swampscott towards Lynn. There are no freeways within town, with the nearest access being to Massachusetts Route 128 in Peabody and Beverly. Four MBTA Bus routes – the 441, 442, 448, and 449 – originate in town regularly with service to Boston, with weekend service to Wonderland in Revere. The Newburyport/Rockport Line of the MBTA Commuter Rail passes through neighboring Swampscott and Salem, with service between the North Shore and Boston's North Station. The nearest air service is located at Beverly Municipal Airport, with the nearest national and international service at Boston's Logan International Airport. Seasonal ferry service to Boston can also be found in Salem. 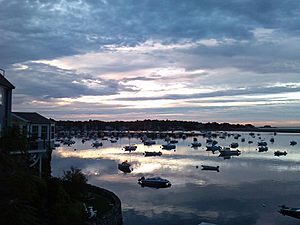 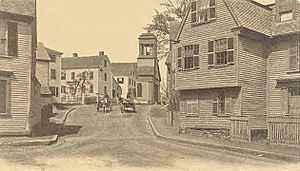 There were 8,541 households out of which 31.2% had children under the age of 18 living with them, 56.5% were married couples living together, 8.0% had a female householder with no husband present, and 33.5% were non-families. 28.7% of all households were made up of individuals and 10.7% had someone living alone who was 65 years of age or older. The average household size was 2.37 and the average family size was 2.94. 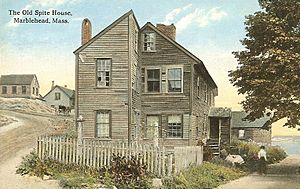 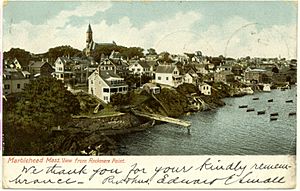 In the 75 years from the American Revolution to the middle of the nineteenth century, Marblehead experienced a golden age of fishing. For the next 50 years, the industry struggled, but from 1900 until the end of the twentieth century, one small anchorage made itself proud. From boat building to sail design, Little Harbor, also known as First Harbor, produced creative men whose innovations helped shape marine history. Marblehead's First Harbor: The Rich History of a Small Fishing Port, written by Hugh Peabody Bishop and Brenda Bishop Booma tells the story through the eyes of a Marblehead fisherman. Today, the waters of Little Harbor, protected by Trustees of Reservations-owned Crowninshield Island and Priest Island, provide a mecca for human-powered water sports, kayaking and kayak fishing. Little Harbor is located in Old Town, surrounded by Fort Sewell, Burial Hill and Peaches Point.

Devereux Beach is located on Ocean Avenue just before the causeway; Marblehead's most popular beach offers more than five acres of sand, public picnic tables and a playground. It is a popular spot to observe fireworks on Fourth of July. Lifeguards are on duty once the beach opens for summer in late June. During summer months, non-residents must pay $5–$10 to park between 8am and 4pm. Marblehead residents must have a facility sticker or they will be charged the non-resident rate. The two pavilions with grills are available for rental during the spring and fall but a permit from the town is necessary. 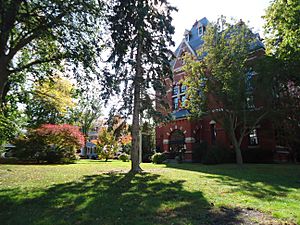 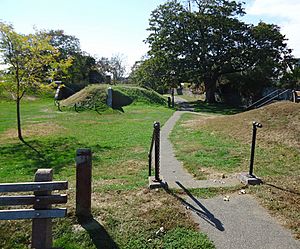 Marblehead Manor was a sitcom about a wealthy Marblehead resident that ran for one season on CBS. 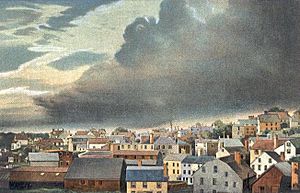 Movies filmed in Marblehead include:

What's the Worst That Could Happen? was filmed in Manchester-by-the-Sea, but scenes are set in Marblehead.

Horror and fantasy writer H. P. Lovecraft derived great inspiration from Marblehead. Following his first visit in December 1922, he retroactively, reconfigured his fictional Kingsport in its own image. As of 1920, Kingsport was an unspecified location on Rhode Island, only mentioned in passing The name most probably a slight alteration of Kingstown, R.I. Seven years later, Lovecraft described the 1922 impressions of his first experience of Marblehead:

Lovecraft had it that his recurring character of Randolph Carter, popularly considered an idealized version of Lovecraft himself, grew up in Kingsport. He used Kingsport as a setting for his short stories "The Terrible Old Man" (1920, published 1921), "The Festival" (written 1923, published 1925), and "The Strange High House in the Mist" (1926, published 1931). The poignant conclusion to one of his Randolph Carter stories, the fantasy novella The Dream-Quest of Unknown Kadath (written c.1926, published posthumously in 1943) takes place here.

Work by other writers

All content from Kiddle encyclopedia articles (including the article images and facts) can be freely used under Attribution-ShareAlike license, unless stated otherwise. Cite this article:
Marblehead, Massachusetts Facts for Kids. Kiddle Encyclopedia.