The film was released in the United States on July 16, 1993, by Walt Disney Pictures. The film received mixed reviews from film critics at the time of its release. It was not a critical or commercial success upon its release, possibly losing Disney around $16.5 million during its theatrical run. However, largely through many annual airings on Disney Channel and Freeform (formerly ABC Family) all throughout the month of October annually, Hocus Pocus has been rediscovered by audiences, resulting in a yearly spike in home video sales of the film every Halloween season. The annual celebration of Halloween has helped make this film a cult classic.

A sequel, written by Jen D'Angelo and directed by Adam Shankman, is in development as a Disney+ original film.

On October 31, 1693, in Salem, Massachusetts, Thackery Binx witnesses his little sister, Emily, being whisked away to the woods by the Sanderson sisters, three witches named Winifred, Sarah, and Mary. At their cottage, the witches cast a spell on Emily to absorb her youth and regain their own, killing her in the process. Thackery confronts the witches, but is transformed into a black cat cursed with immortality. Suddenly, the townsfolk, led by Thackery's friend, Elijah, and Binx's father, immediately arrest the sisters and sentence them to be hanged for the murder of Thackery and Emily. Before their execution, Winifred casts a spell that will resurrect the sisters during a full moon on All Hallows' Eve when any virgin lights the Black Flame Candle. Thackery decides to guard the cottage to ensure no one summons the witches.

Three centuries later, on October 31, 1993, Max Dennison is feeling unsettled from his family's sudden move from Los Angeles, California, to Salem. On Halloween, Max takes his younger sister Dani out trick-or-treating, where they meet Max's new crush Allison. In an effort to impress Allison, Max invites her to show him the Sanderson house to convince him the witches were real.

Inside the Sanderson cottage, now a former museum, Max lights the Black Flame Candle and inadvertently resurrects the witches due to his virginity. The witches attempt to suck the soul of Dani, but Max comes to her rescue. Escaping, Max steals Winifred's spellbook on advice from Thackery, who now goes by his last name of Binx. The witches pursue them to an old cemetery, where Winifred raises her unfaithful lover Billy Butcherson as a zombie to chase them on foot.

The witches try to acclimate to the 20th century, but are horrified when they discover Halloween has become a festival of disguises. They pursue the children across town using Mary's enhanced sense of smell. Max, Dani, and Allison find their parents at the City Hall Halloween party, where Winifred enchants the partygoers to dance until they die. At Jacob Bailey High School, the children trap the witches in a kiln to burn them alive. While the children are celebrating, the witches' curse revives them again.

Not realizing the witches have survived, Max and Allison open the spellbook intending to reverse the spell on Binx. The open spellbook reveals the location of the group, and the witches track them down, kidnap Dani and Binx, and recover the grimoire. Sarah uses her siren-like song to entice Salem's children, luring them to the Sanderson cottage. Max and Allison rescue Dani and Binx by tricking the witches into believing that sunrise was an hour early. Thinking that they are done for, the witches panic and pass out, allowing Max, Dani, Allison, and Binx to escape.

Back at the cemetery, the group is ambushed by Billy who then takes Max's knife, cuts open his stitched up mouth, and insults Winifred, therefore joining Max, Allison, Dani and Binx against the witches. The witches attack, and Winifred attempts to use the last vial of potion to suck the soul from Dani. Binx leaps on Winifred and knocks the potion out of her hand. Max drinks the potion, forcing the witches to take him instead of Dani. The sun starts to rise just as Winifred is about to finish draining Max's life force; in the ensuing struggle, Allison, Dani, and Billy fend off Mary and Sarah, and Max and Winifred fall onto the hallowed ground in the cemetery, causing Winifred to turn into stone. As the sun finishes rising above the horizon, Mary and Sarah are disintegrated into dust along with Winifred's stone body.

With the witches gone, Max, Dani, and Allison say goodbye to Billy, as he returns to his grave. Binx finally dies, freeing his soul. Appearing as a spirit, Binx thanks the group for their help and bids farewell to them as he is reunited with the spirit of Emily.

The exhausted partygoers, including Max and Dani's parents, oblivious to their enchantment, are freed when the spell is broken. Meanwhile, at the Sanderson's cottage, Ice and Jay, who previously tormented Max and Dani, remain imprisoned in cages and sing "Row, Row, Row Your Boat" to pass the time. Winnie's spell book is seen opening its eye, revealing it is still alive and the witches could possibly return again.

The musical score for Hocus Pocus was composed and conducted by John Debney. James Horner was originally slated to score the film, but became unavailable at the last minute, so Debney had to score the entire film in two weeks. Even though he didn't score the film, Horner came back to write the theme for Sarah (sung by Sarah Jessica Parker, more commonly known as "Come Little Children") which is featured in Intrada's Complete Edition of the score.

Debney released a promotional score through the internet containing 19 tracks from the film. Bootlegs were subsequently released across the internet, primarily because the promotional release missed the entire opening sequence music. 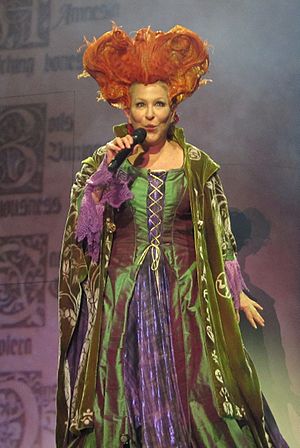 Over the years, through various outlets such as strong DVD sales and annual record-breaking showings on Freeform's 13 Nights of Halloween, the film has achieved cult status. Various media outlets such as Celebuzz and Oh No They Didn't have reiterated such claims. In its 25th anniversary year in 2018, the first week of Hocus Pocus viewings on Freeform averaged 8.2 million viewers. A special called the "Hocus Pocus 25th Anniversary Halloween Bash" was filmed at the Hollywood Forever Cemetery and features interviews with members of the cast, including Bette Midler, Sarah Jessica Parker, and Kathy Najimy, as well as a costume contest hosted by Sharon and Kelly Osbourne. It aired on Freeform October 20, 2018.

In October 2011, the Houston Symphony celebrated various horror and Halloween classics, including Hocus Pocus, with "The Hocus Pocus Pops". On October 19, 2013, D23 held a special screening of Hocus Pocus at the Walt Disney Studios in Burbank, California, to honor the 20th anniversary of the film. Nine of the cast and crew gathered for the screening, and hundreds of D23 members attended. Returning members included Kathy Najimy, David Kirschner, Thora Birch, Doug Jones, Vinessa Shaw, and Omri Katz.

During her Divine Intervention Tour in 2015, Bette Midler appeared on stage dressed as Winifred Sanderson. Her Harlettes appeared with her dressed as Mary and Sarah, and the three of them performed the film's version of "I Put a Spell on You".

On September 15, 2015, the Hocus Pocus Villain Spelltacular was introduced at the Magic Kingdom as a part of Mickey's Not-So-Scary Halloween Party. The show introduces new actresses as the Sanderson Sisters, who try to make a villain party and summon or attract various Disney villains in the process. In September 2016, entertainment critic Aaron Wallace published Hocus Pocus in Focus: The Thinking Fan's Guide to Disney's Halloween Classic, the first full-length book written about the film. The book includes a foreword by Thora Birch and afterword by Mick Garris. Billed as a "lighthearted but scholarly look at the film," the book analyzes the film's major themes, which it identifies as festivity, nostalgia, home, horror, virginity, feminism, Broadway-style musical moments, sibling rivalry, "Spielbergian" filmmaking style, Disney villain traditions, and more. Wallace also analyzes Walt Disney World's Hocus Pocus Villain Spelltacular as part of the film's legacy and includes "the largest collection of Hocus Pocus fun facts and trivia ever assembled," complete with extensive endnote citations.

The City of Salem has celebrated its connection to Hocus Pocus, while local filming sites have become an attraction for fans as the film's legacy has grown over the years. In 2018, the Haunted Happenings Grand Parade, an annual Salem festival held every October, was Hocus Pocus-themed in honor of the film's 25th anniversary. A representative for Destination Salem also reported a huge uptick in tourism for the 25th anniversary year, stating: "There’s always been a ‘Hocus Pocus’ component to the visitors to Salem, especially in October. But it's like the film's following grows every year.”

In July 2014, it was announced that Disney was developing a supernatural-themed film about witches, and that Tina Fey was on board as a producer and star. However, Deadline debunked rumors that the film was a sequel to Hocus Pocus. In November 2014, Bette Midler said in an interview that she was ready and willing to return for a sequel. She also said her co-stars Sarah Jessica Parker and Kathy Najimy were interested in reprising the roles of the Sanderson sisters as well, but stressed that Disney had yet to greenlight any sequel. In November 2015, Midler stated in a Facebook Q&A that "after all these years and all the fan demand, I do believe I can stand and firmly say an unequivocal no" in response to a question about a sequel.

In June 2016, actor Doug Jones mentioned that Disney had been considering a sequel, and behind the scenes discussions were in place to possibly continue the series. In October 2016, Sarah Jessica Parker was asked by Andy Cohen about a sequel. Her response was, "I would love that. I think we've been very vocal that we're very keen." In Hocus Pocus in Focus: The Thinking Fan's Guide to Disney's Halloween Classic, author Aaron Wallace identifies several potential approaches for a sequel, but notes that the project's biggest challenge is the Walt Disney Studios' interest in tentpole projects that promise very high box office returns.

In September 2017, screenwriter Mick Garris admitted that he was working on a script for Hocus Pocus 2 and that it would potentially be developed as a television film for Disney Channel, Freeform or ABC. It was later confirmed that it will instead be a remake to air on Freeform, with The Royals writer Scarlett Lacey attached to write, and the original film producer David Kirschner executive producing. The following month, Midler said she was not fond of the idea of a remake and she would not be taking part in it.

In July 2018, a book titled Hocus Pocus and the All-New Sequel was released, containing a novelization of the film and a sequel story. The sequel focuses on Max and Allison's daughter, Poppy, who grew up hearing the family story of the first film and parents who avoid Halloween as much as possible. Poppy is skeptical of the tale and ends up in the Sanderson house on Halloween, twenty-five years to the day after the film, in an attempt to prove there is nothing to the story.

In October 2019, a sequel was announced to be in development as a Disney+ exclusive film, with a screenplay written by Jen D'Angelo. Shortly after the report, Midler, Parker, and Najimy all confirmed their interest in reprising their roles. In March 2020, Adam Shankman signed on to direct. In December 2020, it was officially announced that the film would be premiering on Disney+.

All content from Kiddle encyclopedia articles (including the article images and facts) can be freely used under Attribution-ShareAlike license, unless stated otherwise. Cite this article:
Hocus Pocus (1993 film) Facts for Kids. Kiddle Encyclopedia.