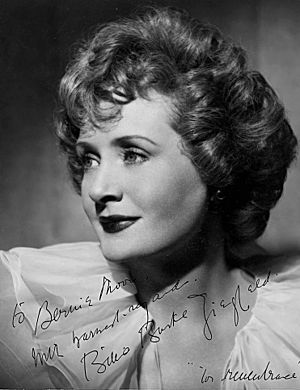 Billie Burke (August 7, 1884 - May 14, 1970) was an American stage, movie, and television actress. She was born Mary William Ethelbert Appleton Burke in Washington, DC. Her father was the circus clown, Billie Burke. She married Florenz Ziegfeld Jr. on 11 April 1914. He died on 22 July 1932. They had one child, a daughter. Burke played Glinda, the Good Witch, in the 1939 MGM movie The Wizard of Oz. She died of natural causes in Los Angeles, California.

All content from Kiddle encyclopedia articles (including the article images and facts) can be freely used under Attribution-ShareAlike license, unless stated otherwise. Cite this article:
Billie Burke Facts for Kids. Kiddle Encyclopedia.