Florenz Edward Ziegfeld Jr. ( March 21, 1867 – July 22, 1932) was an American Broadway impresario, notable for his series of theatrical revues, the Ziegfeld Follies (1907–1931), inspired by the Folies Bergère of Paris. He also produced the musical Show Boat. He was known as the "glorifier of the American girl". Ziegfeld is a member of the American Theater Hall of Fame. 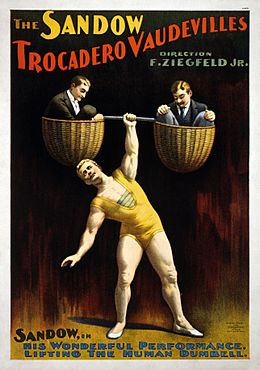 Poster for The Sandow Trocadero Vaudevilles, produced by Ziegfeld (1894)

Florenz Edward Ziegfeld Jr. was born on March 21, 1867, in Chicago, Illinois. His mother, Rosalie (née de Hez), who was born in Belgium, was the grandniece of General Count Étienne Maurice Gérard. His father, Florenz Edward Ziegfeld, was a German immigrant whose father was the mayor of Jever in Friesland. Ziegfeld was baptized in his mother's Roman Catholic church. His father was Lutheran.

As a child Ziegfeld witnessed first-hand the Chicago fire of 1871. His father ran the Chicago Musical College and later opened a nightclub, the Trocadero, to obtain business from the 1893 World's Fair. To help his father's nightclub succeed, Ziegfeld hired and managed the strongman Eugen Sandow.

During a trip to Europe, Ziegfeld came across a young Polish-French singer by the name of Anna Held. His promotion of Held in America brought about her meteoric rise to national fame. It was Held who first suggested an American imitation of the Parisian Folies Bergère to Ziegfeld. Her success in a series of his Broadway shows, especially A Parisian Model (1906), was a major reason for his starting a series of lavish revues in 1907. Much of Held's popularity was due to Ziegfeld's creation of publicity stunts and rumors fed to the American press.

Ziegfeld's stage spectaculars, known as the Ziegfeld Follies, began with Follies of 1907, which opened on July 7, 1907, and were produced annually until 1931. These extravaganzas, with elaborate costumes and sets, featured beauties chosen personally by Ziegfeld in production numbers choreographed to the works of prominent composers such as Irving Berlin, George Gershwin and Jerome Kern. The Follies featured the famous Ziegfeld girls, female chorus dancers who wore elaborate costumes and performed in synchronization.

Ziegfeld and Held commenced a common-law marriage in 1897, but she divorced him in 1913, according to her obituary in The New York Times dated August 13, 1918. Held served Ziegfeld with divorce papers on April 14, 1912, and their divorce became final on January 9, 1913. Held had submitted testimony about Ziegfeld's relationship with another woman. The unnamed party in this romantic triangle was showgirl Lillian Lorraine, an entertainer of limited talent but charismatic stage presence and beauty whom Ziegfeld discovered in 1907 when she was a 15-year-old performer in a Shubert production. Ziegfeld spent years promoting her career, transforming her into one of the most popular attractions in his Follies and establishing her in an apartment two floors above the residence he shared with Held. He remained in love with Lorraine for the rest of his life.

However, Ziegfeld and actress Billie Burke were married April 11, 1914, after meeting at a party on New Year's Eve. They had one child, Patricia Ziegfeld Stephenson (1916–2008). The family lived on his estate in Hastings-on-Hudson, New York, and in Palm Beach, Florida. 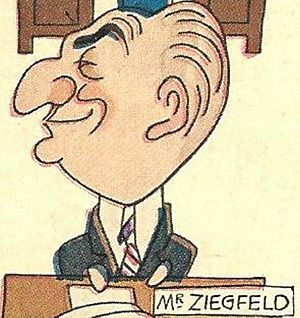 At a cost of $2.5 million, Ziegfeld built the 1600-seat Ziegfeld Theatre on the west side of Sixth Avenue between 54th and 55th Streets. Designed by Joseph Urban and Thomas W. Lamb, the auditorium was egg-shaped, with the stage at the narrow end. A huge medieval-style mural, The Joy of Life, covered the walls and ceiling. To finance the construction, Ziegfeld borrowed from William Randolph Hearst, who took control of the theater after Ziegfeld's death.

The Ziegfeld Theatre opened in February 1927 with Ziegfeld's production of Rio Rita, which ran for nearly 500 performances. This was followed by Show Boat, a great hit with a run of 572 performances. This musical, which concerned racial discrimination in the South during the late nineteenth century, was a collaboration between Ziegfeld, Urban, and composer Jerome Kern. The musical has been revived four times on Broadway, winning multiple Tony Awards. The score features several classics such as "Ol' Man River" and "Can't Help Lovin' Dat Man".

Ziegfeld lost much of his money in the stock market crash. In May 1932 he staged a revival of Show Boat that ran for six months—a hit, by Depression standards. That same year, he brought his Follies stars to CBS Radio with The Ziegfeld Follies of the Air.

Ziegfeld died in Hollywood, California on July 22, 1932, from pleurisy, related to a previous lung infection. He had been in Los Angeles only a few days after moving from a New Mexico sanitarium. His death left Burke with substantial debts, driving her toward film acting to settle them. He and Burke are interred in Kensico Cemetery in Valhalla, New York.

Ziegfeld was elected to the American Theatre Hall of Fame. 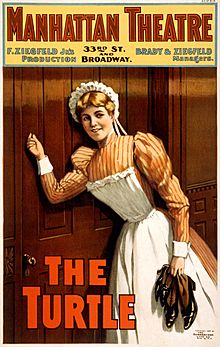 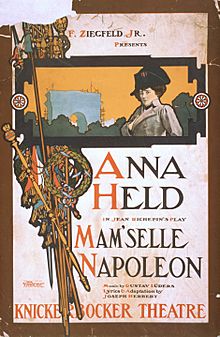 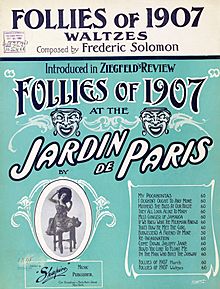 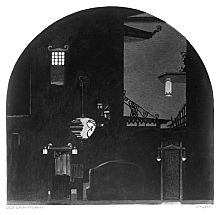 Ziegfeld appears in a sound prologue to the 1929 film, Show Boat—a part-talkie based on Edna Ferber's 1926 novel, not the popular stage adaptation that was still playing on Broadway when the film was released. Universal Pictures originally made Show Boat as a silent, and obtained the rights to the popular Broadway score after the film was shot. The 18-minute prologue is introduced by Ziegfeld and producer Carl Laemmle, and features excerpts from the stage production performed by cast members Jules Bledsoe, Tess Gardella, Helen Morgan and the Broadway chorus. Two subsequent adaptations of Show Boat, in 1936 and 1951, were based on the stage musical.

Technicolor screen versions of three of Ziegfeld's stage musicals were produced in the early sound film era. RKO Pictures had its first hit with its lavish presentation of Rio Rita (1929), starring Bebe Daniels and John Boles.

Marilyn Miller reprised one of her greatest stage successes in Sally (1929). Eddie Cantor reprised his popular Broadway role in Whoopee! (1930), which Ziegfeld himself produced with Samuel Goldwyn.

All content from Kiddle encyclopedia articles (including the article images and facts) can be freely used under Attribution-ShareAlike license, unless stated otherwise. Cite this article:
Florenz Ziegfeld Jr. Facts for Kids. Kiddle Encyclopedia.