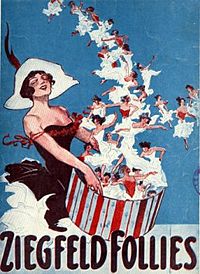 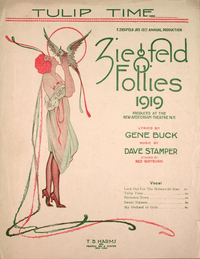 Sheet music for a song from the 1919 Ziegfeld Follies 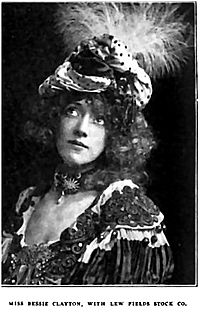 The dancer Bessie Clayton was, like many of the girls, quite small by modern standards (5' 1)

The Ziegfeld Follies were a series of elaborate theatrical productions on Broadway in New York City from 1907 through 1931, with renewals in 1934 and 1936. The Ziegfeld Follies were inspired by the Folies Bergère of Paris. They were conceived and mounted by Florenz Ziegfeld. The show producers were Klaw & Erlanger, the top turn-of-the-twentieth-century showmen.

The Ziegfeld girls "paraded up and down flights of stairs as anything from birds to battleships." The "Tableau vivants" were designed by Ben Ali Haggin from 1917 to 1925. Joseph Urban was the scenic designer for the Follies shows starting in 1915.

After Ziegfeld's death, his widow Billie Burke, authorized use of his name for Ziegfeld Follies in 1934 and 1936 to Jake Shubert, who then produced the Follies. When later it toured, the 1934 edition was recorded in its entirety, from the Overture to Play-out music. First issued as a series of 78 rpm discs, the recording was later released as a compact disc (1997).

They became a radio program in 1932 and 1936 as The Ziegfeld Follies of the Air. The 1936 Academy Award Best Picture winner was M-G-M's The Great Ziegfeld, starring William Powell as the master showman and co-starring Myrna Loy (as Ziegfeld's second wife Billie Burke), 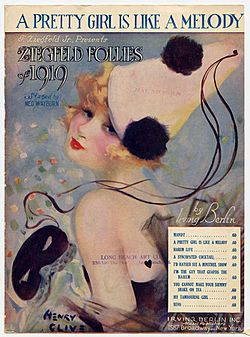 All content from Kiddle encyclopedia articles (including the article images and facts) can be freely used under Attribution-ShareAlike license, unless stated otherwise. Cite this article:
Ziegfeld Follies Facts for Kids. Kiddle Encyclopedia.