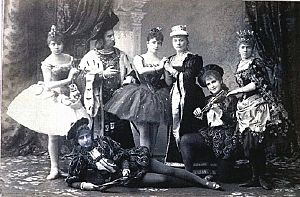 Cast of the ballet Sleeping Beauty, by Tchaikovsky, in a tableau vivant, in 1890

A tableau vivant is when people pose and make the scene look like the one in a picture. People in a tableau vivant don't move or speak. The name comes from French, and translates as "living picture". The plural is tableaux vivants.

In Europe, tableaux vivants became popular towards the end of the 19th century. Sometimes, there was even music. Jean Sibelius composed his work Finlandia (1900) for a sequence of tableaux vivants.

At the beginning of the 20th century, they became notorious, because usually naked women would present them in revue theatres.

All content from Kiddle encyclopedia articles (including the article images and facts) can be freely used under Attribution-ShareAlike license, unless stated otherwise. Cite this article:
Tableau vivant Facts for Kids. Kiddle Encyclopedia.