Kids Encyclopedia Facts
This page is about the village of Hastings-on-Hudson, New York. For the town in Oswego County, New York, see Hastings, New York.

Hastings-on-Hudson is a village in Westchester County located in the southwest part of the town of Greenburgh in the state of New York, United States. It is located on the eastern bank of the Hudson River, about 20 miles (32 km) north of midtown Manhattan in New York City, and is served by a stop on the Metro-North Hudson Line. To the north of Hastings-on-Hudson is the village of Dobbs Ferry, to the south, the city of Yonkers, and to the east unincorporated parts of Greenburgh. As of the 2017 ACS 5-year population estimate, it had a population of 8,903. The town lies on U.S. Route 9, "Broadway", along with the Saw Mill River Parkway and I-287.

The area that is now Hastings-on-Hudson was once the home of the Weckquaesgeek Native Americans, one of the Algonquian tribes. In summer, the Weckquaesgeeks camped at the mouth of the ravine running under the present Warburton Avenue Bridge. There they fished, swam and collected oysters and clamshells used to make wampum. On the level plain nearby (which is now Maple Avenue), they planted corn and possibly tobacco.

Around 1650 a Dutch carpenter named Frederick Philipse arrived in New Amsterdam. In 1682 Philipse traded with the Native Americans for the area that is now Dobbs Ferry and Hastings. In 1693 the English crown granted Philipse the Manor of Philipsburg, which included what is now Hastings-on-Hudson. After dividing the area into four nearly equal-sized farms, the Philipses leased them to Dutch, English and French Huguenot settlers.

During the American Revolution, what is now Hastings lay between the lines of the warring forces and was declared neutral territory. In reality, the area became a no-man's land and was raided repeatedly by both sides. Following the Revolution, the Philipses, who had been loyal to George III, saw their vast lands confiscated and sold by the newly established American state. In 1785 the four farms comprising today’s Hastings were bought by James DeClark, Jacobus Dyckman, George Fisher, and tavern keeper Peter Post. 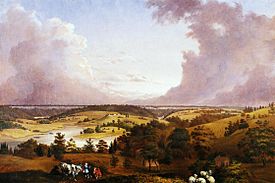 Around the same time, Westchester County, which had been established as one of the 10 original counties in New York, was divided into towns, and the area that is now Hastings became part of the town of Greenburgh. The village was incorporated in 1879 and its name changed from Hastings-Upon-Hudson to Hastings-on-Hudson.

Stone quarrying was the earliest industry in Hastings. From 1865 to 1871, hundreds of Scottish and Irish laborers blasted huge quantities of dolomite marble from a white Westchester marble quarry. An inclined railroad carried the marble down to the quarry wharf where it was dressed by skilled stonecutters and loaded onto ships bound for cities like New York and Charleston, South Carolina.

By the 1880s, Hastings Pavement was producing hexagonal paving blocks which were used extensively in Central Park and Prospect Park in Brooklyn. Between 1895 and 1900, Hastings Pavement produced 10 million such blocks and shipped them throughout the United States and to cities in Canada, Brazil and England. By 1891 the National Conduit and Cable Company had established an operation on the waterfront producing cables for utility companies here and abroad. Labor strife between striking workers of the National Cable and Conduit Company in 1912 left four people dead. Two were striking workers; the remaining two were bystanders. Similar labor unrest occurred in 1916, whereby the village was put under house arrest.

During World War I, 200 National Guardsmen were stationed in Hastings because of the security interests of the National Conduit plant and a chemical plant opened by Frederick G. Zinsser that produced a wood alcohol called Hastings Spirits.

The Anaconda Copper Company took over National Conduit in 1929, and a few years later acquired the Hastings Pavement property. By the end of World War II, Anaconda owned most of the industrial waterfront. Anaconda closed its Hastings plant in 1975, bringing to an end the century-long era of heavy industry on the Hastings waterfront.

Billie Burke, actress (the "Good Witch" in the Wizard of Oz) lived in Hastings and left her property to the school district, which still owns it, and uses it for various sports.

Children's Village, a boarding facility for children in difficult circumstances, located in neighboring Dobbs Ferry, sold about 50 acres (200,000 m2) of its property in Hastings to a developer in 1986. The developer was planning to build close to 100 homes that would result in traffic on the roads adjoining Hillside Elementary School. Local residents formed a committee "Save Hillside Woods" and raised close to $800K. The 1987 stock market crash and the subsequent receivership of the bank that held the mortgage on the property resulted in the purchase of this property from the FDIC with the funds accumulated and a bond floated by the Village of Hastings to expand and maintain Hillside Woods.

The Jasper F. Cropsey House and Studio and Hastings Prototype House are listed on the National Register of Historic Places. The John William Draper House is listed as a National Historic Landmark

Although a suburb of New York City, Hastings-on-Hudson enjoys significant mass transit service, compared to many other suburbs in the United States. Commuter rail service is available via the Hastings-on-Hudson railway station, served by the Metro-North Railroad's Hudson Line to Grand Central Terminal and Poughkeepsie; transfers to Amtrak's Empire Corridor are available three stops south, at Yonkers railway station. Additionally, several bus routes operated Bee-Line Bus System for much of the Village, connecting Hastings-on-Hudson with other places in Westchester as well as to the northern Bronx. 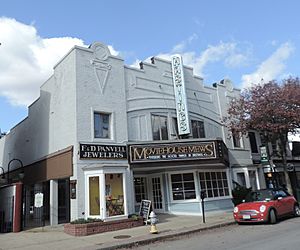 In 2013, the infusion of urban professionals from New York City resulted in characterization of the town as an example of "hipsturbia", a neologism coined by The New York Times to describe the hip lifestyle as lived in suburbia by "hipsters." However, this article has been the subject of much controversy both within and with-out the community, with the New York Observer publishing one particularly scathing commentary. 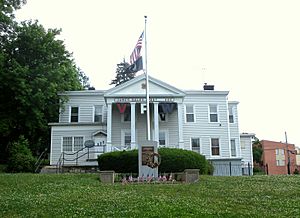 Attractions and places for recreation include:

All content from Kiddle encyclopedia articles (including the article images and facts) can be freely used under Attribution-ShareAlike license, unless stated otherwise. Cite this article:
Hastings-on-Hudson, New York Facts for Kids. Kiddle Encyclopedia.