The article about her talk show is Ricki Lake (TV series)

Ricki Pamela Lake (born September 21, 1968) is an American actress, producer, and television host. She hosted her own talk show, named Ricki Lake from 1993 until 2004. Lake played Tracy Turnblad in the 1988 movie Hairspray. During the 1990s she starred in many movies. These included Serial Mom and Mrs. Winterbourne. She recently hosted another talk show named The Ricki Lake Show which began in 2012.

Lake was born to secular, Jewish parents, Barry who is a pharmacist and Jill who is a housewife. Lake went to Ithaca College and Professional Children's School.

After her first talk show

In September 2011, Lake competed in Dancing with the Stars with Derek Hough. She got third place. She lost to Rob Kardashian and J. R. Martinez, respectively. 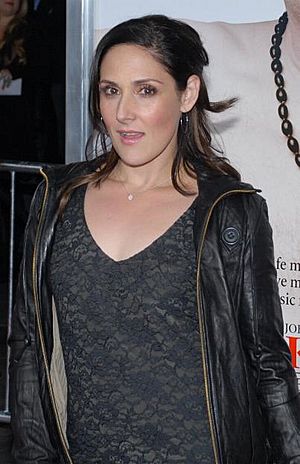 All content from Kiddle encyclopedia articles (including the article images and facts) can be freely used under Attribution-ShareAlike license, unless stated otherwise. Cite this article:
Ricki Lake Facts for Kids. Kiddle Encyclopedia.