Swampscott is a town in Essex County, Massachusetts, United States located 15 miles (24 km) up the coast from Boston in an area known as the North Shore. The population was 13,787 as of 2010[update]. A former summer resort on Massachusetts Bay, Swampscott is today a fairly affluent residential community and includes the village of Beach Bluff, as well as part of the neighborhood of Clifton. It is known for its quiet suburban character and lovely beaches. The town was home to the scenic ocean front college, Marian Court College until 2015. 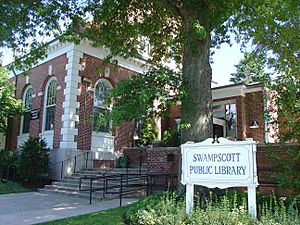 Swampscott was first settled in 1629 as the eastern part (Ward One) of Lynn, and was set off and officially incorporated in 1852. A beach town north of Boston, measuring 3 square miles (7.8 km2), and abutting Salem, Marblehead and Lynn, Swampscott was an important destination for the wealthy at the beginning of the 20th century. While Revere Beach, which lies just several miles down the road, has the honor of technically being America's first public beach, Swampscott was the de facto first resort town. Lynn was the divider between the poor beach and the rich resort town. The name "Swampscott" comes from the language of a local Native American tribe, and means "red rock".

The following is verbatim from the official Swampscott web page: "History of Swampscott."

Swampscott's public school system includes three elementary schools, Hadley School, Clarke School, and Stanley School, one middle school, Swampscott Middle School, and one high school, Swampscott High School. The Machon elementary school was shuttered in 2008/9, but the property remains on the district's rolls. A new building was completed in 2007 for Swampscott High School. In 2011, The Town of Swampscott is working out the details of installing a massive wind turbine, with the approximate height of a 30-story building on the property of the Swampscott Middle School. When installed it is expected to generate a little more than half of the power for the middle school.

Swampscott is mostly suburban, with most of the clear land in the northwest corner of town. There are three villages within town, Beach Bluff to the east, Phillips Point to the south, and Phillips Beach inland between the two. The town is centered around Monument Square, designed by Frederick Law Olmsted; which is 4 miles (6 km) south of Salem, 12 miles (19 km) northeast of Boston, and 20 miles (32 km) southwest of Cape Ann. The town is 23 miles (37 km) to the nearest point in New Hampshire, in the town of Salem. Swampscott is bordered by Marblehead to the northeast, Salem to the northwest, and Lynn to the southwest. The water rights of the town extend into Massachusetts Bay, bordered by those of Marblehead and Lynn.

Swampscott is located along Massachusetts Route 1A and Route 129. Both routes enter from Lynn, with Route 1A passing north of the town center towards Salem, and Route 129 following the coast for a half mile before going inland north of Phillips Point and returning to the coast before heading into Marblehead. There is no highway within town, which lies well south of Massachusetts Route 128 and Interstate 95. The town is served by numerous MBTA bus routes which lead into the surrounding towns. Swampscott has a historic train station along the Newburyport/Rockport Line of the MBTA Commuter Rail, with service from the North Shore to Boston's North Station. Another abandoned spur rail line crosses through the town towards Marblehead, where it has been converted into a bicycle path. The nearest air service can be reached at Beverly Municipal Airport, and the nearest national and international air service can be found at Boston's Logan International Airport.

There were 5,719 households out of which 33.3% had children under the age of 18 living with them, 58.2% were married couples living together, 9.0% had a female householder with no husband present, and 30.3% were non-families. 25.9% of all households were made up of individuals and 13.6% had someone living alone who was 65 years of age or older. The average household size was 2.48 and the average family size was 3.00.

The median income for a household in the town was $84,174, and the median income for a family was $92,795. Males had a median income of $56,541 versus $38,690 for females. The per capita income for the town was $45,487. The town is among some of the richest towns in the state (see List of Massachusetts locations by per capita income) and is currently ranked at 16th. About 2.5% of families and 3.7% of the population were below the poverty line, including 4.1% of those under age 18 and 5.4% of those age 65 or over. The median home sale price for the town in 2007 was $565,894. Home values typically range from around $400,000 to upwards of $5 million for ocean front homes. These prices are comparable to other wealthy North Shore towns such as Marblehead and Manchester-by-the-Sea which are located nearby. In upper class oceanfront neighborhoods and neighborhoods with ocean views or views of the Boston skyline, average home prices increase to as much as $1,038,569 and average household incomes can range upwards of $150,000. Larger oceanfront properties have recently been assessed at values greater than $5 million and in some cases upwards of $10 million. 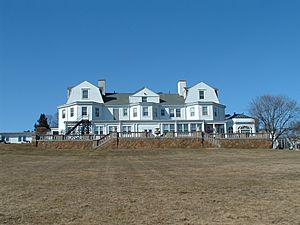 The MBTA provides its Commuter Rail service from Boston's North Station with the Swampscott station on its Newburyport/Rockport Line, as well as several bus lines. The closest access to the subway is the Blue Line at Wonderland station in Revere, Massachusetts.

All content from Kiddle encyclopedia articles (including the article images and facts) can be freely used under Attribution-ShareAlike license, unless stated otherwise. Cite this article:
Swampscott, Massachusetts Facts for Kids. Kiddle Encyclopedia.