St. Michael's is set on a property that primarily faces Summer Street to the south, even though its address is on Pleasant Street to the north. The church building was constructed in 1714, originally as a parish church of the Church of England, and twenty-nine of the original thirty-three donors were sea captains. The Society for the Propagation of the Gospel in Foreign Parts provided the church with its first rector. The original square church had a similar architectural style in layout and roof design to the Nieuwe Kerk Church (Haarlem) in the Netherlands. The church was expanded in 1728. During the American Revolutionary War in 1776 a mob of patriots raided the church and removed the British royal coat of arms from the building. Many of St. Michael's members were Loyalists who fled to Canada during the Revolution.

In 1793 the original spire on the bell tower was taken down 'being rotten.' The building was renovated in 1833 with Gothic windows, new pews and with the altar, a pulpit and original reredos at the north end. Stained glass windows by Redding & Baird were installed in the Gothic windows in 1888. The windows over the south entrance were added later. The church building was added to the National Register of Historic Places in 1973. In the 1980s, residing activity uncovered some of the original window configuration, and archaeological activity was done in its crypt area to study 18th-century burial practices. In August 2014 a spire was added back to the bell tower as part of the church's 300th anniversary celebration. 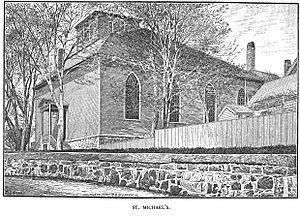 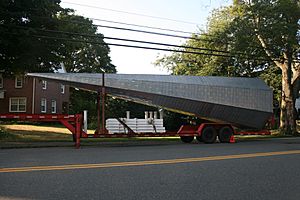 All content from Kiddle encyclopedia articles (including the article images and facts) can be freely used under Attribution-ShareAlike license, unless stated otherwise. Cite this article:
St. Michael's Church (Marblehead, Massachusetts) Facts for Kids. Kiddle Encyclopedia.