After the commercial success of Bat Out of Hell and Bat Out of Hell II: Back Into Hell and earning a Grammy Award for Best Solo Rock Vocal Performance for the song "I'd Do Anything for Love", Meat Loaf experienced some initial difficulty establishing a steady career within the United States. However, he has retained iconic status and popularity in Europe, especially the United Kingdom, where he received the 1994 Brit Award for best-selling album and single, appeared in the 1997 film Spice World, and ranks 23rd for the number of weeks spent on the UK charts as of 2006. He ranked 96th on VH1's "100 Greatest Artists of Hard Rock".

He is one of the best-selling music artists of all time, with worldwide sales of more than 80 million records. He has also appeared in over 50 movies and television shows, sometimes as himself or as characters resembling his stage persona. His most notable roles include Eddie in The Rocky Horror Picture Show (1975), Robert "Bob" Paulson in Fight Club (1999), and "The Lizard" in The 51st State (2002). He has also appeared as a guest actor in television shows such as Monk, Glee, South Park, House, and Tales from the Crypt. 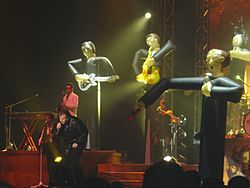 On stage at Birmingham's NEC arena, 2007

In 1984, Meat Loaf legally changed his first name from Marvin to Michael.

Meat Loaf is a baseball fan and supporter of the New York Yankees. He is an avid fantasy baseball player and participates in multiple leagues every season.

He is also a supporter of the northern English football team Hartlepool United and, in 2003, the BBC reported he was seeking a residence in the nearby area. He currently resides just outside Calabasas, California, near Saddle Peak and Calabasas Peak. In June 2008 he took part in a football penalty shootout competition on behalf of two cancer charities in Newcastle upon Tyne in the United Kingdom. He auctioned shots to the 100 highest bidders and then took his place between the goal posts. He also participates in celebrity golf tournaments.

In December 1978, he went to Woodstock to work with Steinman. It was at the Bearsville studio that Meat Loaf met his future wife, Leslie G. Edmonds; they were married within a month. Leslie had a daughter, Pearl, from a previous marriage (Pearl later married Scott Ian, the rhythm guitarist for the thrash metal band Anthrax).

Meat Loaf and his family moved to Stamford, Connecticut, in 1979. In 1981, Leslie gave birth to Amanda Aday, later a television actress.

For a brief period, Meat Loaf returned to Afton, Wyoming to deal with controversy surrounding an illegitimate child born in the small mountain town. Shortly after, they moved to Newport. According to Meat Loaf, Pearl, then in the fifth grade, came home crying "because she had the wrong type of jeans and I said, 'That's it. We're gone.'" The family then moved to Redding, Connecticut, "which is much more of a blue-collar, working-class kind of town, and it really didn't make any difference what kind of jeans you were wearing. I really liked it there."

Meat Loaf coached children's baseball or softball in each of the Connecticut towns where he lived. In 1998, Meat Loaf relocated to California. Meat Loaf and Leslie divorced in 2001.

He married Deborah Gillespie in 2007. At the start of his 2012 tour in Austin on June 22, Meat Loaf announced that he was a new resident (1 month) of Austin, Texas.

Meat Loaf was a vegetarian for ten years.

All content from Kiddle encyclopedia articles (including the article images and facts) can be freely used under Attribution-ShareAlike license, unless stated otherwise. Cite this article:
Meat Loaf Facts for Kids. Kiddle Encyclopedia.