Cannondale station is a commuter rail station on the Danbury Branch of the Metro-North Railroad's New Haven Line, located in the Cannondale neighborhood of Wilton, Connecticut. The station building was added to the National Register of Historic Places in 1992 as part of the Cannondale Historic District.

The station has a two-car-long high-level side platform west of the single track. The station has 140 parking spaces, all of which are managed by the Town of Wilton. 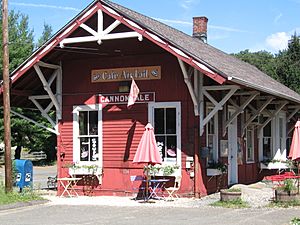 The historic station building in September 2007

The Danbury and Norwalk Railroad opened the line in late February 1852, with the official opening on March 1. Charles Cannon of Cannondale was the subcontractor who helped build the route through Wilton. The train cost passengers 30 cents to go to South Norwalk and 50 cents to Danbury at a time when the day's wages of a laborer might not be a dollar. Two trains made the trip up and down the line each day. In the first few years, a freshet and a flood from the Norwalk River twice shut down the line for repairs. The station made travel suddenly much quicker than stagecoach transportation. After a few years, when speeds picked up a bit on the line, it took 28 minutes to reach South Norwalk.

In its early years, the line had no more than 390 passengers a day using the service, and an average of 34 passengers per train. L. Peter Cornwall, a railroad historian, estimated that perhaps no more than a dozen people used Cannondale in its early years. Although there may have only been a flag stop (in which passengers or railroad employees raised a flag if they needed the train to stop), by 1856 it was a regular stopping point for all trains, and the stop was originally called Cannon's. In the early 1870s the station was no longer listed and was probably a flag stop. In the 1890s it was again listed as a station, now called Cannon. Just before World War I, the station name was changed to Cannondale. The station is currently a contributing property of the Cannondale Historic District, which has been on the National Register of Historic Places since 1992.

The Cafe au Lait coffee shop in the station house closed on March 31, 2010.

All content from Kiddle encyclopedia articles (including the article images and facts) can be freely used under Attribution-ShareAlike license, unless stated otherwise. Cite this article:
Cannondale station Facts for Kids. Kiddle Encyclopedia.