Cannondale Historic District is a historic district in the Cannondale section in the north-central area of the town of Wilton, Connecticut. The district includes 58 contributing buildings, one other contributing structure, one contributing site, and 3 contributing objects, over a 202 acres (82 ha). About half of the buildings are along Danbury Road (U.S. Route 7) and most of the rest are close to the Cannondale train station (another half dozen buildings are along Seeley Road).The district is significant because it embodies the distinctive architectural and cultural-landscape characteristics of a small commercial center as well as an agricultural community from the early national period through the early 20th century....The historic uses of the properties in the district include virtually the full array of human activity in this region—farming, residential, religious, educational, community groups (the Grange), small-scale manufacturing, transportation, and even government (the building that housed the first Cannondale Post Office). The close physical relationship among all these uses, as well as the informal character of the commercial enterprises before the rise of more aggressive techniques to attract consumers, capture some of the texture of life as lived by prior generations.The district is also significant for its collection of architecture and for its historic significance.

The district has a number of buildings in Greek Revival style, as well as Victorian era buildings and Colonial Revival buildings.

Part of the historic district is composed of restored, 19th-century buildings in the 8-acre (32,000 m2)"Cannon Crossing" shopping development on the north side of Cannon Road and across the railroad tracks from the Cannondale train station. The development was created by actress June Havoc, who sold the property in 1989. At least four contributing objects in the historic district are described in the NRHP nomination, including the 1872 Schoolhouse, which Havoc had moved to its present site in the late 1970s (from its original site at the corner of Olmstead Hill and Danbury Roads).

Properties in the district include the following (unless otherwise noted, quotations are from the 1992 registration form filed with the National Register of Historic Places): 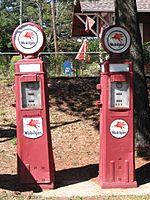 All content from Kiddle encyclopedia articles (including the article images and facts) can be freely used under Attribution-ShareAlike license, unless stated otherwise. Cite this article:
Cannondale Historic District Facts for Kids. Kiddle Encyclopedia.