Havoc was a child vaudeville performer under the instruction of her mother Rose Thompson Hovick. She later acted on Broadway and in Hollywood, and stage-directed, both on and off-Broadway. Her first movie was Gentleman's Agreement and she last appeared on television in 1990 on the soap opera General Hospital. Her elder sister Louise gravitated to burlesque and became the well-known Gypsy Rose Lee.

Havoc was married three times. Her first marriage, at age 16, was in December 1928 to Bobby Reed, a boy in her vaudeville act. Her second marriage was in 1935 was to Donald S. Gibbs; they later divorced. Her third marriage, to radio and television director and producer William Spier (1906–1973), lasted from January 25, 1948 until his death.

In the mid-1970s, Havoc purchased an abandoned train depot and various 19th-century buildings in Wilton, Connecticut called Cannon Crossing. Restoring, rebuilding and re-purposing several small buildings from other locations, she worked hands-on and successfully completed this vast restoration project, which remains a popular destination today. It is home to artisan shops, galleries, boutiques, a cafe and a restaurant.

A long-time resident of Fairfield County (Weston, Wilton and lastly North Stamford) Connecticut, Havoc was fiercely devoted to the care and well-being of animals. Her homes were a nurturing and loving sanctuary to many orphaned geese, donkeys, cats, and dogs over the decades.

Havoc died at her home in Stamford, Connecticut, on March 28, 2010, from unspecified natural causes. She was believed to be 97 at the time of her death. The June Havoc Theatre, housed at the Abingdon Theatre in New York City, was named for her in 2003. 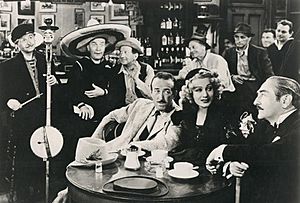 Havoc was nominated for the Tony Award for Best Direction of a Play in 1964 for Marathon '33, which she wrote.

In 2000, Havoc was inducted into the American Theatre Hall of Fame.

All content from Kiddle encyclopedia articles (including the article images and facts) can be freely used under Attribution-ShareAlike license, unless stated otherwise. Cite this article:
June Havoc Facts for Kids. Kiddle Encyclopedia.