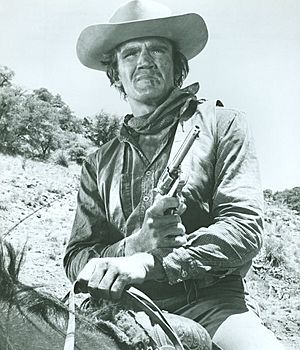 David Hoyt Canary (August 25, 1938 – November 16, 2015) was an American movie and television actor. He was best known for his roles as Adam and Stuart Chandler in All My Children and as Candy Canady in Bonanza. He was born in Elwood, Indiana.

Canary died from complications of Alzheimer's disease in Wilton, Connecticut at the age of 77.

All content from Kiddle encyclopedia articles (including the article images and facts) can be freely used under Attribution-ShareAlike license, unless stated otherwise. Cite this article:
David Canary Facts for Kids. Kiddle Encyclopedia.