The name "Silvermine" comes from old legends of a silver mine in the area, although no silver has ever been found. Silvermine was long an art colony and remains the home of the Silvermine Guild Arts Center. The Silvermine Tavern, an inn occupying several historic buildings, also remains in the neighborhood. Silver Hill Hospital is just beyond the northern end of the neighborhood, in New Canaan near the Wilton border. There are two community groups specific to Silvermine: The Silvermine Community Association and the Norwalk Association of Silvermine Homeowners (NASH). 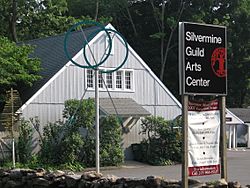 The area has been settled since at least the late seventeenth century. In the eighteenth century, the Silvermine River was used for 12 or 13 mills in the neighborhood because it fell steeply enough for the water power to be profitably harnessed. The mills included a leather tanning works, sawmill, and spool works.

Solon Borglum, a sculptor, moved to the New Canaan part of Silvermine in 1906 and built a hillside studio. He was one of the leading figures in an emerging community of artists in the neighborhood and helped found the "Knockers Club" – so named because when they would meet in Borglum's studio and discuss their art, a lot of frank criticism came out, knocking one another's work – that later became the Silvermine Guild, one of the largest and oldest art centers in New England. Other artists in the neighborhood included George Avison, D. Putnam Brinley, John Cassell, Richard Daggy, Leo Dorn, R. B. Gruelle, Bernhard Gutmann, Hamilton Hamilton, Howard Hildebrandt, Cornelia Ellis Hildebrandt, Frank Townsend Hutchens, Adele Klaer, E. Murray MacKay, Clifton Meek, Addison T. Millar, Sam Otis and Carl Schmitt. The Guild operated the Silvermine College of Art, an accredited two-year educational institution, for ten years starting in 1962.

In 1899, the present Perry Avenue Bridge was constructed. The one-lane stone bridge carries the road over Silvermine River near the Silvermine Tavern grist mill. In the flood of 1955, water flowed over the bridge. The span was put on the National Register of Historic Places in October 2006. That year one of the bridge's curbstones fell into the water, and for the six months before Memorial Day weekend in 2008 the span was closed as repairs were made. The bridge is so narrow that when at times when cars try to pass another, curbstones can be hit. The Norwalk city government spent $350,000 in repairs, which included masonry restoration, new railings, repaving and further narrowing so that drivers would not be tempted to try to pass. A parade with antique cars was held to celebrate the reopening of the bridge.

In 2003, the Norwalk Association of Silvermine Homeowners (NASH) began a campaign to get the neighborhood recognized on the National Register of Historic Places. For years, the association wanted the entire neighborhood designated, but because of newer construction, the original proposal was broken up into several smaller sections. The group raised $13,000 on its own and, on June 26, 2006, the State Historic Preservation Office granted $7,000 to study the "core" area of the neighborhood in order to draw up a proposal. State Sen. Bob Duff, a Norwalk Democrat, helped get increased state funding for the State Historic Preservation Office which gave out the grant to the community. Duff told a local newspaper that four generations of his family have lived in the neighborhood.

The Perry Avenue Bridge in the neighborhood, built in 1899, was separately nominated for the National Register in mid-2006 and was listed on October 25, 2006. 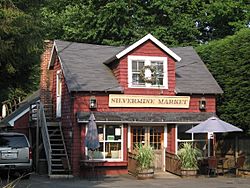 Silvermine Market, aside from the tavern and its associated store, the only other business in the neighborhood

In Norwalk, the neighborhood includes a bit of New Canaan Avenue near the New Canaan line and Purdy Road, Comstock Hill Avenue and streets off it, Silvermine Avenue just north of its intersection with Bartlett Avenue, Cliffview Drive, James Street and Riverview Drive, Perry Avenue north and west of Route 7 and North Seir Hill Road, south of its intersection with Vespucci Road, which is also in the neighborhood.

The Silvermine Tavern, a restaurant and inn with 11 overnight rooms, is a group of historic buildings overlooking the mill falls on the Silvermine River. The grist mill building, constructed in the seventeenth century, is the oldest of the four structures, which also include the tavern building, the coach house and the country store.

The tavern has operated since 1929 when John Byard started running it there. In 1948 the tavern changed hands and was run by I.M. Weiss until it passed on to the Whitman family. Frank and Marsha Whitman took over the tavern in 1973. In 2007 they announced they were selling it, with an asking price of $4.5 million. The Whitmans notified their patrons about the sale with letters to longtime, loyal customers in an attempt to find a buyer who values the traditions of the local institution, although the marketing was also going beyond that group to restaurateurs in Fairfield County and New York City. The business has 35 employees.

The president of the Connecticut Restaurant Association said in early 2007 that the tavern is a venerable institution, with loyal patrons who would not want dramatic changes to it. Brian Griffin, vice president of the Greater Norwalk Chamber of Commerce, called the business "one of the true New England taverns that we have left in the area, and it's absolutely a part of the neighborhood."

Aside from being a restaurant, Silvermine Tavern was a popular place for weddings and wedding receptions, as well as other private functions. It was also well known in the community for their Sunday Brunch.

Actor Spencer Tracy frequently stayed in Silvermine and purportedly "holds the record for eating the most waffles at one sitting" at the old Grist Mill, when that building was a waffle shop in the 1930s. In more recent years the restaurant's honey buns were a popular tradition. 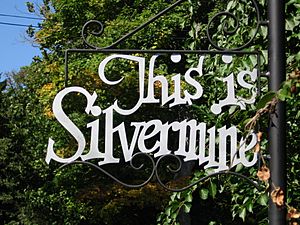 All content from Kiddle encyclopedia articles (including the article images and facts) can be freely used under Attribution-ShareAlike license, unless stated otherwise. Cite this article:
Silvermine, Connecticut Facts for Kids. Kiddle Encyclopedia.