Downtown Stamford is the central business district of the city of Stamford, Connecticut, United States. Also known as "Stamford Downtown." It is an economically thriving area of the city, with major retail establishments, a shopping mall, a university campus, the headquarters of major corporations and fortune 500 companies, as well as other retail businesses, hotels, restaurants, offices, and entertainment venues. In recent years more housing has been constructed in the neighborhood including high-rise residential buildings, and more is planned. 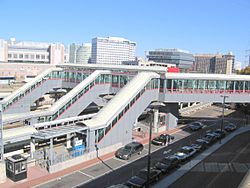 View of buildings Downtown with train station in foreground

With transportation widely seen as one of the biggest challenges facing the Economy of Stamford, Downtown has become an important transportation hub, as well as a business hub for lower Fairfield County. For example, it is an area within walking distance of the Metro-North train station, which is one of the busiest on the New Haven Railroad Line.

The Downtown area has been the heart of Stamford, Connecticut since colonial times. Much of the history of Stamford took place there. Most of the southern and central portions of Downtown have been designated as historic districts, listed as the Downtown Stamford Historic District on the National Register of Historic Places.

In recent years, new development has consumed much of the Downtown area, with the additions of new high-rise buildings and office towers such as the new 35-story Trump Parc Stamford, parks such as the new Mill River Park development project, and housing such as the new 17-story Highgrove Condominium Residences. Other development projects include new student housing at the UCONN Stamford branch, residential housing, and the massive planned Ritz-Carlton Stamford development, which will include two 39-story hotel/condominium towers. The project is currently on hold due to the economic downturn in 2008. The city also plans to make improvements to the Atlantic Street underpass beneath the New Haven Line railroad tracks just east of the Stamford Transportation Center in order to alleviate a traffic bottleneck. The improvements are also meant to allow quicker evacuation of areas of the South End if disaster strikes. The project received a $245,000 earmark in the federal budget passed in December 2007. 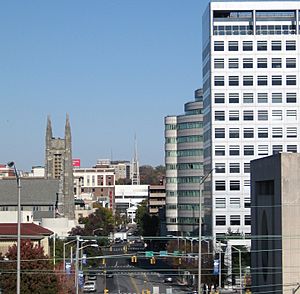 In relation to other neighborhoods in Stamford, the Downtown is east of the West Side (separated by the Mill River), north of the South End (separated by Interstate 95 and the Metro-North Railroad tracks) and Shippan (also separated by the highway and railroad), west of the East Side and Glenbrook, and south of Newfield, Belltown, High Ridge and Turn of River. Bull's Head, the mostly commercial area at the intersection of High Ridge Road and Long Ridge Road, is immediately north of the Downtown. 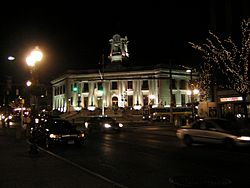 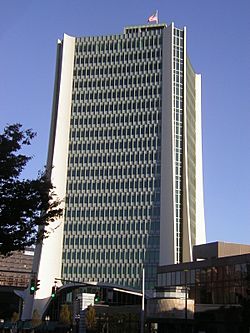 One Landmark Square, the second tallest building in the city, at 21 stories, the tallest being the new Trump Parc, at 35-stories high.

Many of the most distinctive buildings in Downtown Stamford were designed by the late Victor Bisharat, a Jordanian who received his education at the American University in Beirut, Lebanon and at the University of California at Berkeley. His Stamford buildings were designed for F.D. Rich Co. (For information on Bisharat's buildings on High Ridge Road, see Arts and culture in Stamford, Connecticut.) 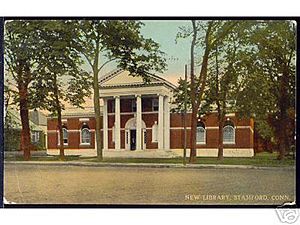 Buildings under construction, proposed, or approved

Mill River Park, which separates Downtown from the West Side, is to be expanded in an $8.5 million project, including $4 million in federal funding earmarked in 2007, with the city government financing the rest of the cost. The federal funding is to pay for removing the Mill River dam and dredging. That part of the project is the first step in the long-planned renovation of the park.

The project plans call for narrowing the width of the river to less than half of its current expanse, which would expand the park's area and provide space for more amenities. The master plan provides for a carousel, fountain, ice rink and network of trails connecting a greenway with the Kosciuszko, Southfield and Scalzi parks. Removing the dam will also allow fish to swim up from Long Island Sound. As of 2007, the U.S. Army Corps of Engineers had spent $800,000 on preliminary studies, planning and design.

The cherry trees in Mill River Park were presented to the city on April 27, 1957 by Junzo Nojima, a native of Japan who had settled in the city in 1926 and in 1932 became the first Japanese man to own a restaurant in the state (K&J Three Decker Restaurant on Atlantic Street). Nojima gave the city 120 trees, and for three years he watered each one until they took root. He gave the city instructions on how to care for them, but when they were overlooked, he began tending the trees himself. On Arbor Day, April 27, 2007, the city celebrated the 50th anniversary of the gift with a ceremony at the park. 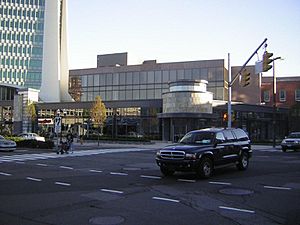 The Downtown Special Services District, known as Stamford Downtown, is booming with exciting events from June through December. Whether it’s a tour of a world class sculpture exhibit, "Alive@Five" and "Jazz up July" outdoor concerts in Columbus Park, Arts & Crafts on Bedford Street or a giant helium balloon parade that marches through Downtown, Stamford Downtown is the place to find it all. These events bring thousands of people into the Downtown.

All content from Kiddle encyclopedia articles (including the article images and facts) can be freely used under Attribution-ShareAlike license, unless stated otherwise. Cite this article:
Downtown Stamford Facts for Kids. Kiddle Encyclopedia.