Arts and culture in Stamford, Connecticut facts for kids 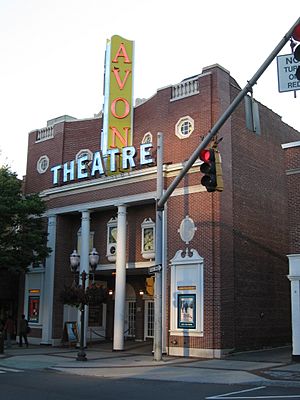 In 2017, the City of Stamford established the Stamford Arts and Culture Commission to help bolster arts and tourism in the city. 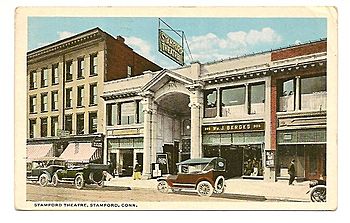 Starting in the 1870s a theater operated from the third floor of the old Town Hall until the building was burned down in 1904. Edwin Booth, a Cos Cob, Connecticut resident, is said to have acted in that theater. The nearby Grand Opera House, which stood on the site of the Palace Theatre, also burned down.

The Alhambra Theatre on the present Washington Boulevard, later sprang up and was running as early as 1909. It provided "High Class Vaudeville" without swearing or dirty jokes. In 1914, Emily Wakeman Hartley founded the Stamford Theatre at the corner of what is now Atlantic Street and Tresser Boulevard, where the Rich Forum stands today. Wakeman became manager of the theater, which hosted many famous performers of the day, often before their fame crested. In 1924, Humphrey Bogart trod the boards in a supporting role of a comedy, Fool's Gold. In 1927, Bela Lugosi starred in Dracula: The Vampire Play four years before he played the same role on film. George Gershwin's first Broadway show, La La Lucille played in the theater in 1919, and in 1921, the Al Jolson-produced play, Lei Aloha opened at the theater, six years before Jolson created a sensation with his role in the movie The Jazz Singer. In 1928, the theater advertised a Sunday performance of the "World's Greatest Pianist", Sergei Rachmaninoff, calling him simply "Rachmaninoff".

In the 20th century, particularly after World War II, educational and cultural institutions were founded in the city or expanded in a range of areas. 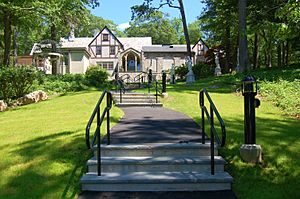 The nature center's farm includes llamas, pigs and sheep. In early 2007, more than seven lambs were born at the farm, as well as some piglets. The sheep are mixtures of Jacob, Dorset and Black Welsh Mountain sheep breeds.

Stamford has opportunities to see art by both local artists as well as national and international ones.

Examples of two of the painted electrical boxes.

All content from Kiddle encyclopedia articles (including the article images and facts) can be freely used under Attribution-ShareAlike license, unless stated otherwise. Cite this article:
Arts and culture in Stamford, Connecticut Facts for Kids. Kiddle Encyclopedia.