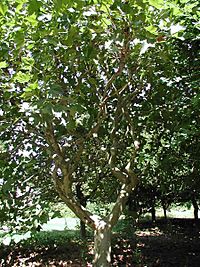 The Bartlett Arboretum and Gardens in Stamford, Connecticut contains 93 acres of parkland, gardens, landscapes, and hiking trails that focus on the regional plants, ecology and character of Southwestern New England. The Arboretum is open and accessible to the public every day of the year and is located at 151 Brookdale Road.

The Arboretum started in 1913, when Dr. Francis A. Bartlett, an eminent dendrologist and founder of the F.A. Bartlett Tree Expert Company, acquired "30 acres [12 hectares] more or less" of North Stamford woodland to use as his residence, training school and research laboratory for his company. Over the years, he assembled a large number of plant specimens on the property from all over the world. In 1965, when the research laboratory moved to North Carolina, the Stamford site, then covering more than 60 acres (24 hectares), was purchased by the State of Connecticut and designated the Connecticut State Arboretum. In 1993, the land and overall operation of the Arboretum were transferred to the University of Connecticut at Stamford. In 2001, the land was transferred to the City of Stamford and operations were transferred to the Bartlett Arboretum Association, an independent non-profit organization. The Bartlett Arboretum Association continues to operate the grounds today.

In 2006, the Arboretum began numerous research programs, continuing the tradition of research begun by Dr. Bartlett nearly a century earlier. Current research focuses on local plant ecology such as floristics and herbivory responses of Connecticut Forests, and the ecology and evolution of tropical plants, particularly the Araceae. This work has led to several published research papers by staff in the past few years. 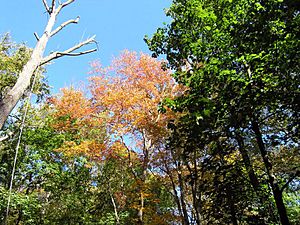 The Arboretum contains the following collections: 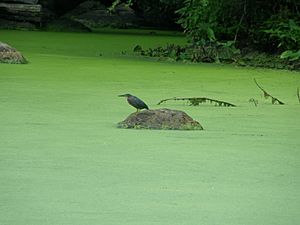 A green heron in the gardens

All content from Kiddle encyclopedia articles (including the article images and facts) can be freely used under Attribution-ShareAlike license, unless stated otherwise. Cite this article:
Bartlett Arboretum and Gardens Facts for Kids. Kiddle Encyclopedia.