Cos Cob, Connecticut facts for kids

Cos Cob is a neighborhood and census-designated place in the town of Greenwich, Connecticut. It is located at 41.033 north, 73.6 west, on the Connecticut shoreline in southern Fairfield County. It had a population of 6,770 at the 2010 census.

Cos Cob is located on the western side of the mouth of the Mianus River. The American Impressionist Cos Cob Art Colony flourished in the late 19th and early 20th centuries. An offshoot of the group, the Greenwich Art Society, continues to support local artists in town.

The town of Greenwich is one political and taxing body, but consists of several distinct sections or neighborhoods, such as Banksville, Byram, Cos Cob, Glenville, Mianus, Old Greenwich, Riverside and Greenwich (sometimes referred to as central, or downtown, Greenwich). Of these neighborhoods, three (Cos Cob, Old Greenwich, and Riverside) have separate postal names and ZIP codes. From 1883 to 1885, the official post office name of Cos Cob was Bayport. 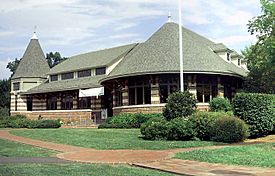 The Anchorage, Cos Cob by Theodore Robinson, ca. 1894

The community is situated on Cos Cob Harbor, a sheltered area on the north side of Long Island Sound. Cos Cob's role as a commercial shipping port, supplying potatoes and apples to New York City, disappeared with the appearance of the railroad and damming of the Mianus River. The river is now one source of the town's drinking water.

Cos Cob gets a train for Christmas 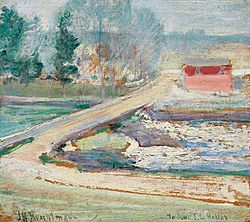 The Cos Cob train station and the Mianus River Railroad Bridge are listed on the National Register of Historic Places.

"On Christmas Day, 1848, the last rails were laid over the Cos Cob Bridge, thereby supplying the last link needed to complete the railroad from New Haven to New York," according to the Stamford Historical Society Web site. "The first trial run was made on that day."

Editors of two Stamford newspapers reported on the event. William H. Holly, Esq., founder of the Stamford Sentinel and a guest on the first trial run, wrote: "The train had to remain at Cos Cob Bridge some three hours for the last rails to be laid over it and the delay gave ample opportunity to the people to come and witness the wonderful feat. The general impression among them seemed to be, that the first train that attempted to cross this pass would also be the last."

Edgar Hoyt, editor of the Stamford Advocate, wrote: "The citizens of the village as well as the horses, cattle, etc., were nearly frightened out of their propriety ... by such a horrible scream as was never heard to issue from any other than a metallic throat. Animals of every description went careening round the fields, snuffling the air in their terror."

The coal-fired steam turbine Cos Cob Power Plant built by Westinghouse in 1907 was a Mission Style structure. It was designated a Historic Mechanical Engingeering Landmark in 1982 by the ASME and the IEEE. Despite being listed on the National Register of Historic Places and local and national debate, the plant was decommissioned in 1987 and demolished in 2001.

Ernest Thompson Seton lived in Cos Cob on an estate which is now a town park. Over 75 years ago what would eventually become the Boy Scouts of America was in part founded by him here.

On June 28, 1983, a 100-foot (30 m) elevated portion of Interstate 95 (the Mianus River Bridge) collapsed, killing and injuring several motorists. Interstate 95 is the principal highway between Maine and Florida, and one of the most heavily traveled roads in the country. Because the road was not fully reopened for six months, it created a bottleneck which affected the New York to Boston transportation corridor.

In 2006 NRG Energy Inc. of La Jolla, California, proposed adding additional capacity of 40 megawatts to the current 60 megawatt plant to supplement Connecticut Light and Power during peak periods in southwestern Fairfield County. Two additional jet turbines would be added to the existing plant in 2008.

In addition to the Bush-Holley House, these sites in Cos Cob are listed by the National Register of Historic Places:

All content from Kiddle encyclopedia articles (including the article images and facts) can be freely used under Attribution-ShareAlike license, unless stated otherwise. Cite this article:
Cos Cob, Connecticut Facts for Kids. Kiddle Encyclopedia.