Kids Encyclopedia Facts
For town of the same name of which the village of Mamaroneck is part, see Mamaroneck, New York.
"Rye Neck" redirects here.

Mamaroneck mə-MAR-ə-nek is a village in Westchester County, New York, United States. The population was 18,929 at the 2010 census. As of 2019[update] its population was an estimated 19,131. It is located partially within the town of Mamaroneck and partially within the town of Rye. The portion in Rye is unofficially called "Rye Neck". The Rye Neck Union Free School District contains the Rye Neck portion of Mamaroneck and part of the city of Rye.

Originally the farming community of Mamaroneck was located on two sides of the Mamaroneck River. In the 1890s the two areas surrounding the river were joined into one commercial village, Mamaroneck, which was incorporated in 1895. The east side of the village lies in the town of Rye and is known as Rye Neck. Some controversy surrounded the incorporation of the village, but the State Appellate Court approved the village's election status. The population of Mamaroneck village in 1895 was 1,500.

Along with the other shore communities of Westchester, Mamaroneck was at one time the location of summer residences for wealthy families from New York City. Summer residence neighborhoods included Greenhaven, Orienta and Shore Acres. The local railroad from New York City (now Metro-North) began to serve the village in 1848. Currently the village of Mamaroneck is a commuter town for individuals working in Manhattan. A harbor on the Long Island Sound supports facilities for pleasure boating and is the location of Harbor Island Park, a large public park with beach and sporting facilities.

The main commercial streets in Mamaroneck are the Boston Post Road (U.S. Route 1) and Mamaroneck Avenue, the site of several annual parades. Local industry is centered on Fenimore Road. 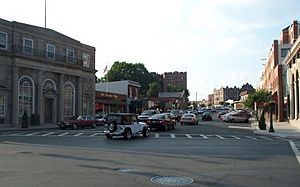 Intersection of Mamaroneck Avenue and the Boston Post Road 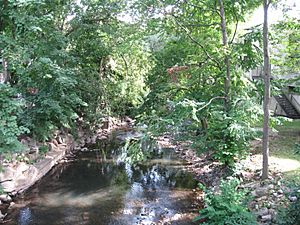 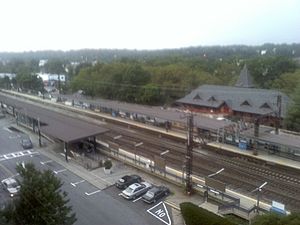 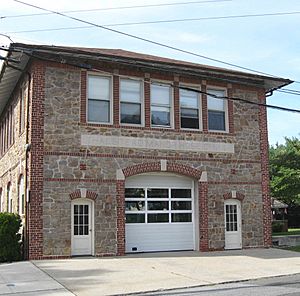 Mamaroneck Village residents represent more than 70 nationalities, including 30 from Europe, 20 from Latin America, seven from Asia and six from the Middle East, and five from Africa, according to the U.S. Census Bureau’s American Community Survey for 2015-19, via the National Historical Geographic Information System (nhgis.org) and detailed on the Mamaroneck Historical Society's website.

As of 2019, the top 10 nationalities by size and their estimated village population were:

About one-third of survey respondents who reported ancestry reported multiple ancestries. Sixteen percent didn’t report ancestry or their answer was unclassified in one of the groups the Census Bureau listed.

The 10 nationalities that grew fastest in Mamaroneck Village from 2010 to 2019 were:

All content from Kiddle encyclopedia articles (including the article images and facts) can be freely used under Attribution-ShareAlike license, unless stated otherwise. Cite this article:
Mamaroneck (village), New York Facts for Kids. Kiddle Encyclopedia.