Archie Comics is a comic book company in the United States. Its most famous and popular title is "Archie". This comic book is about a teenage boy named Archie Andrews and his friends: Betty Cooper, Veronica Lodge, Reggie Mantle, and Jughead Jones. Every single character in this comic book is fictional and are created by Bob Montana. All characters were based on people he knew in Haverhill, Massachusetts. Other popular titles include "Sabrina the Teenage Witch", "Sonic the Hedgehog", and Josie and the Pussycats. Archie's first appearance was in Pep Comics #22 on December 22, 1941. This addition was drawn by Montana and written by Vic Bloom.

Archie lives in a small town named the "Riverdale". The state, or the general location of this town is not known. However, in the early years of the Archie comics, Riverdale was in Massachusetts, and Mr. Lodge was a senator for that state, but this is no longer part of the story. There is also a part of the Bronx in New York City called Riverdale. 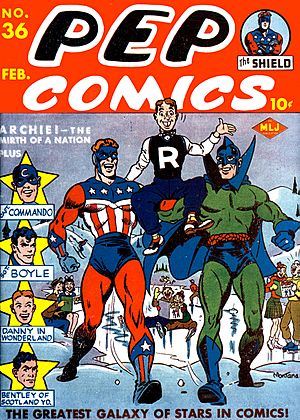 Parents (of the main characters)

Of all the parents, Veronica's father and Archie's parents appear most often.

All content from Kiddle encyclopedia articles (including the article images and facts) can be freely used under Attribution-ShareAlike license, unless stated otherwise. Cite this article:
Archie Comics Facts for Kids. Kiddle Encyclopedia.