Napheesa Collier (born September 23, 1996) is an American professional basketball player for the Minnesota Lynx of the Women’s National Basketball Association (WNBA). After playing college basketball for the University of Connecticut Huskies, Collier was drafted by the Lynx with the 6th overall pick in the 2019 WNBA Draft.

In her freshman year, Collier played for Jefferson City High School in Jefferson City, Missouri, where she averaged 17.9 points and 9.8 rebounds. In her sophomore year, she transferred to Incarnate Word Academy, where she averaged a high of 24.6 points and 12 rebounds. Collier also competed on her high school track team. She was the 2013 and 2015 Gatorade Missouri Player of the Year, one of five finalists for the 2015 Naismith Award as national Player of the Year and Women's Basketball Coaches Association High School All-American. 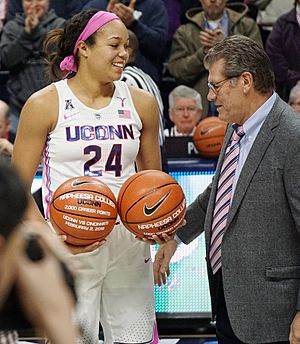 Naphessa Collier, being presented with awards reflecting 2000 points and 1000 rebounds

At the end of her UConn career, Collier ranked 3rd in scoring, 4th in rebounds, and 7th in blocks. She ranks 4th in most consecutive starts at UConn, with 112, had 49 career double-doubles, and averaged a double-double (20.8/10.8) her senior season. She became the fifth player in the exclusive 2000/1000 club, joining UConn greats Maya Moore, Tina Charles, Breanna Stewart and Rebecca Lobo. Collier reached the 1000 rebound mark in the game against Louisville, and reached 2000 points in the very next game against Cincinnati. She was a member of the 2016 Connecticut Huskies National Champion team and reached the Final Four in each of her four years at UConn. She received the Katrina McClain Award for Power Forward of the Year from the Naismith Memorial Basketball Hall of Fame in her senior season. She was an AP 1st Team All-American in both her senior and sophomore seasons, and 2nd Team in her junior season. Collier has the most rebounds (411) in a season at UConn, and finished 2nd with most points in a season at 792 points, trailing only Maya Moore. As a duo, Collier and Katie Lou Samuelson scored the most points in UConn WBB history (4688), topping B. Stewart and M. Jefferson, two teammates from their freshman season.

Collier was selected by the Minnesota Lynx as the 6th overall pick in the 2019 WNBA draft. She was asked to play small forward, then power forward, and later, small forward. In her first WNBA game, Collier scored 27 points against the Chicago Sky, the second-highest debut ever for any rookie (after Candace Parker). She played 33.3 mpg, more minutes per game than any other WNBA player.

She is the second rookie (after Tamika Catchings) in WNBA history to score 400 points, 200 rebounds and 60 steals. Collier is the fourth player (after Maya Moore, Catchings and Sheryl Swoopes) to have a season with 400 points, 200 rebounds, 75 assists, 50 steals, 25 blocks and 25 made three-pointers. Collier was voted to the 2019 WNBA All-Rookie Team, and became an All-Star as an injury replacement for A'ja Wilson.

In the 2020 season while in the WNBA bubble, Collier started a podcast with A'ja Wilson, Tea with A & Phee.

In June 2021, Collier was named to the United States Women's Olympic basketball team to compete in Tokyo, Japan during the 2020 Summer Olympics, marking her first selection.

Collier is the granddaughter of Gershon Collier, a lawyer, former ambassador to the United Nations, former ambassador to the United States, and, briefly, chief justice of Sierra Leone. Later, an expatriate, educator, and Yankees and Giants fan, he died two years before she was born. Her father, Gamal Collier, explained to The New York Times that he brought up Napheesa to know the "importance of self-sufficiency and responsibility and upholding the family name." Gershon had helped Sierra Leone gain its independence from Great Britain in 1961.

Off the court, Collier loves to read, especially mystery novels by Ruth Ware. In October 2019, she became engaged to Alex Bazzell, a basketball skills coach.

All content from Kiddle encyclopedia articles (including the article images and facts) can be freely used under Attribution-ShareAlike license, unless stated otherwise. Cite this article:
Napheesa Collier Facts for Kids. Kiddle Encyclopedia.