Mario Kart  is a series of go-kart racing video games developed and published by Nintendo, as a spin-off from its flagship Super Mario series. Its characters include those from the Mario, The Legend of Zelda, and Animal Crossing series, competing in races while using various items to gain advantage.

The series was launched in 1992 with Super Mario Kart on the Super Nintendo Entertainment System, to critical and commercial success.

The Mario Kart series totals fourteen games, with six on home consoles, three on handheld consoles, four arcade games co-developed with Namco, and one for mobile phones. The latest game in the main series, Mario Kart Live: Home Circuit, was released on Nintendo Switch in October 2020. To date, more than 150 million copies in the series have been sold worldwide.

The first game in the Mario Kart series is Super Mario Kart for the Super Nintendo Entertainment System in 1992. Its development was overseen by Shigeru Miyamoto, the Japanese designer of many successful Nintendo games including Super Mario Bros. Darran Jones of NowGamer suggests that the success of Super Mario Kart resulted from the Super Mario characters, and being a new type of racing game. 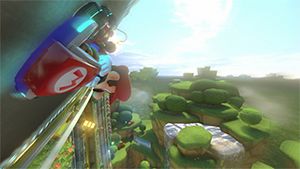 In the Mario Kart series, players compete in go-kart races, controlling one of a selection of characters, mainly from the Mario franchise. Up to twelve characters can compete in each race; the exact number varies between games.

Gameplay is enhanced by power-up items obtained by driving into item boxes laid out on the course. These power-ups include mushrooms to give players a speed boost, Koopa Shells to be thrown at opponents, banana peels, and fake item boxes as hazards. The game chooses an item based on the player's current position in the race. For example, players lagging far behind may receive more powerful items, such as Bullet Bills which give the player a bigger speed boost depending on the place of the player, while the leader may only receive small defensive items, such as shells or bananas. Called rubber banding, this gameplay mechanism allows other racers a realistic chance to catch up to the leading racer. They can perform driving techniques during the race such as rocket starts, slipstreaming, and mini-turbos.

Many recurring course themes are based on the Mario franchise, such as Bowser's Castle. Unique courses inspired by the Mushroom Kingdom include Rainbow Road, above a city or in space. Each game after Super Mario Kart includes at least 16 original courses and up to 6 original battle arenas. Each game's tracks are divided into four "cups", or groups in which the player has to have the highest overall ranking to win and they are the Mushroom Cup, the Flower Cup, the Star Cup, and the Special Cup. Most courses can be done in three laps, except in the original game where all circuits required five laps to finish, seven in Mario Kart: Double Dash!! when racing on Baby Park, and two in Double Dash!! when racing on Wario Colosseum as well as in Mario Kart Tour. The first game to feature courses from previous games was Mario Kart: Super Circuit, which contained all of the tracks from the original Super NES game. Starting with Mario Kart DS, each entry in the series has featured sixteen "nitro" (brand new courses introduced for said game) and 16 "retro" tracks (reappearing courses from previous Mario Kart games), spread across four cups each with four races. The four Retro Grand Prix cups are the Shell Cup, the Banana Cup, the Leaf Cup, and the Lightning Cup. In Mario Kart 8, sixteen additional tracks are available across two downloadable packages, eight for each package downloaded, including seven retro courses, four original courses, and five courses based on other Nintendo franchises, including Excitebike, F-Zero, The Legend of Zelda, and Animal Crossing divided into four additional cups; the Egg Cup, the Triforce Cup, the Crossing Cup, and the Bell Cup. Mario Kart Tour introduced courses from around the world including New York City, Tokyo, Paris, London, Los Angeles, Berlin, Vancouver and Sydney, and variant courses raced in reverse, with additional ramps and elevation, and a combination of the two.

Each game has a variety of modes. The following five modes recur most often in the series:

Available natively on the console

The Mario Kart series has had a range of merchandise. This includes a slot car racer series based on Mario Kart DS, which comes with Mario and Donkey Kong figures and Wario and Luigi are separate. A line of radio-controlled karts are controlled by Game Boy Advance-shaped controllers, and feature Mario, Donkey Kong, and Yoshi. There are additional, larger karts which are radio-controlled by a GameCube-shape controller.

Many racer figurines have been made. Sound Drops were inspired by Mario Kart Wii with eight sounds including the Spiny shell and the Item Box. A land-line telephone features Mario holding a lightning bolt while seated in his kart. 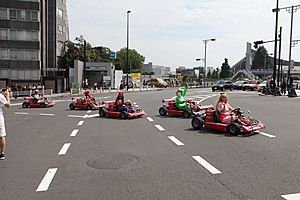 In September 2016, Nintendo filed an objection against the Japanese company MariCar, which rents go-karts modified for use on public roads in Tokyo along with costumes resembling Nintendo characters. MariCar's English website warned customers not to throw "banana peels" or "red turtle shells". The service is popular with tourists.

Nintendo argued that the MariCar name was "intended to be mistaken for or confused with" Mario Kart, citing games commonly known by abbreviations in Japan, such as Pokémon (for Pocket Monsters) and Sumabura (Super Smash Bros.). In January 2017, the Japan Patent Office dismissed the objection, ruling that MariCar was not widely recognized as an abbreviation of Mario Kart.

In February 2017, Nintendo sued MariCar over copyright infringement for renting unauthorized costumes of Nintendo characters and using their pictures to promote its business. In September 2018, MariCar was ordered to stop using the characters and pay Nintendo ¥10 million in damages.

Universal Parks & Resorts and Nintendo have a Mario Kart themed ride within Super Nintendo World at the Universal Studios Japan theme park. This is also to be installed at the Universal parks in Singapore, Orlando, and California. Mario Kart: Koopa's Challenge is at Universal's Epic Universe in Florida.

All content from Kiddle encyclopedia articles (including the article images and facts) can be freely used under Attribution-ShareAlike license, unless stated otherwise. Cite this article:
Mario Kart Facts for Kids. Kiddle Encyclopedia.