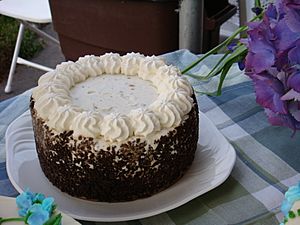 In a typical assembly, the cake component is baked in the normal way, cut to shape if necessary, and then frozen. Ice cream is shaped in a mold as appropriate, and these components are then assembled while frozen. Whipped cream is often used for frosting, as a complement to the two other textures, and because many typical frostings will not adhere successfully to frozen cake. The whole cake is then kept frozen until serving, when it is allowed to thaw until it can be easily sliced but not so much as to melt the ice cream.

It is related to Baked Alaska in that it incorporates ice cream. Unlike Baked Alaska, however, the ice cream never goes into the oven.

Ice cream cake is a popular party food, often eaten at birthdays and weddings, particularly in North America and Australia. It is not as well known in Europe.

Ice cream cake was originally made from biscuits and cream. Victorian era desserts called bombes consisted of ice cream and fruit in decorative molds. Sometimes these desserts were lined with cake or biscuits. Ice cream cake recipes dating to the 1870s have also been found.

In the modern era, ice cream cakes are a popular dessert choice for Fourth of July celebrations, and many cakes prepared for this day are decorated with patriotic motifs, often garnished with whipped cream, red berries and blueberries. Other versions are elaborate flag cakes made with alternating layers of ice cream and sorbet.

Ice cream cakes are popular in the U.S. Carvel has a history of themed cakes advertised on television including Fudgie the Whale and Cookie Puss. Baskin-Robbins, Dairy Queen, Friendly's, Cold Stone Creamery, and other retailers also sell ice cream cakes.

All content from Kiddle encyclopedia articles (including the article images and facts) can be freely used under Attribution-ShareAlike license, unless stated otherwise. Cite this article:
Ice cream cake Facts for Kids. Kiddle Encyclopedia.