Cold Stone Creamery is an American ice cream parlor chain. Headquartered in Scottsdale, Arizona, the company is owned and operated by Kahala Brands. The company's main product is premium ice cream made with approximately 12–14% butterfat, made on location and customized for patrons at time of order. Cold Stone has also expanded its menu with other ice cream related products, including: ice cream cakes, pies, cookie sandwiches, smoothies, shakes and iced or blended coffee drinks.

Since 2008, the company has been co-branding its locations with other chains in an attempt to not only increase its presence outside of the United States, but transform its business model from seasonal to year-round.

In as little as 6 years, they have introduced Cold Stone Creamery into approximately 25 countries outside of the United States and are continuing to expand. 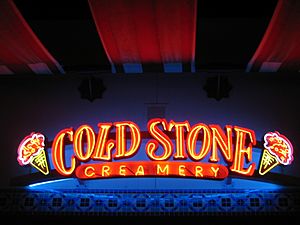 The Company was co-founded in 1988 by Donald and Susan Sutherland, who sought ice cream that was neither hard-packed nor soft-serve. Publicity materials describe it as "smooth and creamy super-premium ice cream." Cold Stone Creamery opened its first store that year in Tempe, Arizona. The original Cold Stone Creamery, store #0001, is in operation today near the same intersection (southwest corner of McClintock & Southern) as the original Tempe location. The store moved from the original location to the current location in the early 1990s.

The Company has maintained the same original business model created by Steve Herrell who founded Steve's Ice Cream. Patrons first select what flavor of ice cream they would like and then choose from a variety of mix-ins available to be folded into their ice cream. Mix-ins can include, but are not limited to: candies, nuts, brownies and/or syrups. Cold Stone's derives its name from the frozen granite slab that the team members use to fold your mix-ins into the ice cream. 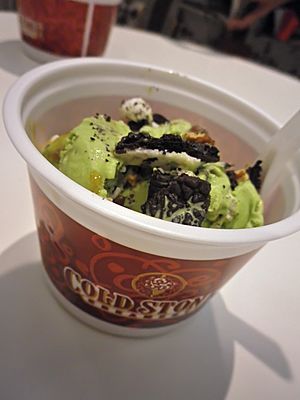 All ice cream is made in house using natural ingredients and waffle cones and bowls are baked daily. The ice cream and ingredients are often mixed in together in consumer view. Cold Stone also offers chocolate-dipped waffle bowls. The company also has a line of ice cream cakes and pies. Ice cream cupcakes and ice cream cookie sandwiches are also available, most of which are made on-site. Stores also offer the option of customizing these frozen desserts much like their ice cream creations. Most recently, Cold Stone Creamery has come out with various desserts ranging anywhere from hot brownies to warm churros.

Cold Stone introduced a series of flavors of ice cream based on popular Jell-O pudding flavors; Chocolate, Butterscotch, Banana, and Vanilla. In 2008 an agreement with Jelly Belly had a line of jelly beans flavored like some of Cold Stone's most popular ice cream flavors.

In the spirit of joviality and to encourage customers to give tips, Cold Stone instructs employees to sing a special song related to the company, usually to the tune of recognizable melodies such as "Take Me Out to the Ball Game", "I've Been Working on the Railroad", or "Bingo", when a customer places money in the tip jar. Lyrics include short, catchy phrases such as, "This is our Cold Stone song, it is not very long." Employees of the original store did not sing songs while they worked.

All content from Kiddle encyclopedia articles (including the article images and facts) can be freely used under Attribution-ShareAlike license, unless stated otherwise. Cite this article:
Cold Stone Creamery Facts for Kids. Kiddle Encyclopedia.