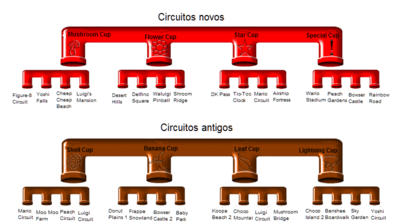 Mario Kart DS is a racing game developed and published by Nintendo for the Nintendo DS. It is the fifth game in the series and the first which used Nintendo's free online service, Nintendo Wi-Fi Connection. The game was released in the North America, Australia, and Europe in November 2005, and in Japan in December 2005, and in South Korea in which it is the very first Wi-Fi Connection game launched in April 2007.

It got positive reviews, and scored an average of 91% from Metacritic.

Like other games in the Mario Kart series, Mario Kart DS involves characters from Mario games racing each other in go-karts on tracks themed from locations in the Mario series. The game, like other Mario Kart games, employs various weapons or items that players can use to help themselves or slow down others. These weapons make Mario Kart different from other racing games.

DS is the first Mario Kart game ever to have computer opponents in battle mode. In battle mode, up to eight carts have four balloons and battle each other until one wins. Another change is that players start with one balloon and must blow into the microphone to blow up other balloons. With fewer balloons, players get better items, but run the risk of getting knocked out early. With more balloons, they are safer, but get items that are not as good.

DS is also the first online Mario Kart title. It used the Nintendo Wi-Fi Connection. Players used "friend codes" and pick four tracks to race. Some tracks cannot be played over Wi-Fi because the game might slow down due to large obstacles.

All content from Kiddle encyclopedia articles (including the article images and facts) can be freely used under Attribution-ShareAlike license, unless stated otherwise. Cite this article:
Mario Kart DS Facts for Kids. Kiddle Encyclopedia.