Mario Kart Tour is a 2019 kart racing mobile game, the fourteenth in the franchise in the Mario Kart series, developed and published by Nintendo for iOS and Android devices. The game was announced in January 2018 and was released on September 25, 2019 on Apple App Store and Google Play.

The game deviates from the traditional gameplay of the Mario Kart series, where the objective is to reach the finish line in first; this game utilizes a point-based system. There are four options of speed: 50cc (namely "leisurely"), 100cc ("fast"), 150cc ("very fast") and 200cc ("too fast"; Gold Pass only). Unlike previous installments in the series, much of the driving (notably acceleration, jump boosts) is performed automatically. Mario Kart Tour includes features from previous Mario Kart games, such as underwater racing and hang gliding from Mario Kart 7. This game introduces a new Frenzy mode, which occurs when a driver gets three identical items from an item box. Each character can get a unique item (also known as "Special Skill") from item boxes. 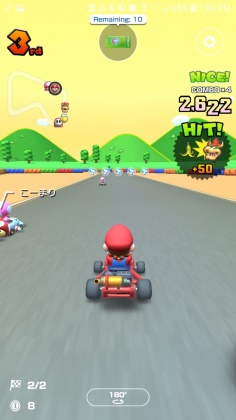 Mario Kart Tour introduces a new format called "Tours". Tours are named after cities in the real world, Mario series characters, Mario series games, or other themes. Each tour lasts for two weeks, beginning on Wednesday at 1.00 a.m. EST. In a tour, players can compete in twelve to eighteen cups and collect drivers, karts and gliders which represent the corresponding cities or themes. There are also spotlight drivers, karts, and gliders while a tour lasts for two weeks. Each Cup consists of three courses and a bonus challenge. Courses from previous cups may be reused for subsequent cups. Most races have two laps, while most bonus challenges are done in one lap. The cups are also named after some of the drivers in the game instead of the usual items in the Mario franchise.

Each week, a tour's cup is a tournament. 20 players are placed on a leaderboard based on the overall score for the cup. By the following Wednesday, Lakitu announces how well the player did. The player will increase in tier, and earn some rewards if their end position is near the top, but they will lose one or two tiers if they finish poorly. The player also gets a reward if the player and their friends' score reaches a certain amount.

This game includes races against AI-controlled opponents with usernames designed to make players think they are playing against other human players. In addition, a beta test for the multiplayer function of this game began from "approximately 2:00 p.m. EST on December 19, 2019 to 0:59 p.m. EST on December 27, 2019" and was only available for subscribers to the Gold Pass. From January 23, 2020 to January 29, 2020, there was a multiplayer test for all players of the game.

At 11 p.m. EST on March 8, 2020, multiplayer function in Mario Kart Tour was officially launched. All players "can race against up to seven other players, whether they're registered as in-game friends, nearby to your location, or even scattered around the world." In the meantime, "Gold Races are available exclusively to subscribers of the Mario Kart Tour Gold Pass." One of the main differences between the Standard Races (for players without the Gold Pass) and the Gold Races is the selection of speed: only 100cc is available in the Standard Races while 150cc and 200cc are available in the Gold Races. There is a multiplayer rank (ranging from F to A, S to S+6 if subscribed to the Gold Pass) for each player. A percentage for the rank will increase when a player wins in a multiplayer race, but will decrease or remain unchanged during a loss.

The game originally could only be played in portrait mode; however, on July 21, 2020, the game received an update that allowed the players to play the game in landscape mode too.

In January 2018, Nintendo announced a mobile version of the Mario Kart series for iOS and Android. Nintendo announced in April 2019 that they would be holding a closed beta for the game, exclusively for Android users, which took place from late May to early June. Initially expected to be released by March 2019, the game was released on September 25, 2019. As of September 26, a day after Mario Kart Tour's release, there had been over ten million downloads of the game.

To celebrate the Super Mario Bros. 35th Anniversary, the game was updated to include two new characters: SNES Mario and Donkey Kong Jr., who had not appeared in the series since Super Mario Kart.

All content from Kiddle encyclopedia articles (including the article images and facts) can be freely used under Attribution-ShareAlike license, unless stated otherwise. Cite this article:
Mario Kart Tour Facts for Kids. Kiddle Encyclopedia.