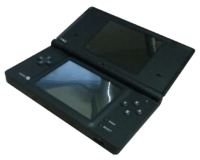 The Nintendo DSi (ニンテンドーDSicode: ja is deprecated , Nintendō Dīesuai) is the third version of the Nintendo DS handheld. It was first available in Japan in December 2008, and in other regions in April 2009.

The DSi is about 12% thinner (2.6 mm) and the screen is about 17% bigger than the Nintendo DS Lite. It has two Video Graphics Array (or VGA) 0.3 megapixel digital cameras; one is pointed at the user and the other is in the outer shell. The power switch is now a power button like the original Nintendo DS instead of a switch and is moved to the bottom to make it harder to bump by accident. It no longer has a slot to play Game Boy Advance games in and one will not be able to play games such as Guitar Hero: On Tour on the DSi because the game requires the slot.

All content from Kiddle encyclopedia articles (including the article images and facts) can be freely used under Attribution-ShareAlike license, unless stated otherwise. Cite this article:
Nintendo DSi Facts for Kids. Kiddle Encyclopedia.