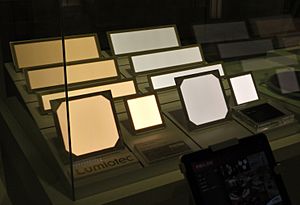 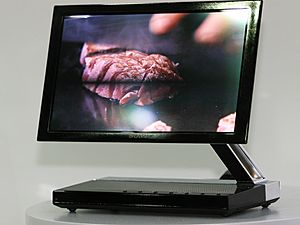 In some ways, OLEDs are better for display devices than LCDs. There are also ways LCDs are better. OLEDs can make more colors and levels of brightness than LEDs. Unlike LCDs their colors do not change when viewed at an angle. They are also much cheaper to make. Most LCDs have to have an LED or Cold Cathode Fluorescent Light(CCFL) used as a backlight to be visible. LCDs also need to use filters to work properly. These filters block much of the light created by the LED/CCFL. Because of backlighting and filtering, OLEDs use far less power than LCDs for the amount of light made (Verify this). OLEDs also react faster to changes in electricity. They turn on and off much faster than LCDs.

LEDs will last longer than OLEDs. This is the biggest problem with OLEDs. Currently most OLEDs used in displays will work for about 5,000 hours of use. LEDs normally work for 60,000 hours. This may change as experiments in 2007 created a type of OLED that worked for 198,000 hours. The organic compounds that make up OLEDs are also more easily damaged by water.

OLED technology is currently patented by the Eastman Kodak company and several other companies. Because of this, a company must pay to be allowed to use it in their product.

There are several parts to an OLED:

The emissive and conductive layers are made of special organic molecules that conduct electricity. The anode and cathode connect the OLED to the source of electricity.

OLED, as with all diodes, can only work if electricity flows through them in the correct direction. The Anode, connected to the emmisive layer must be at a higher electrical potential (more volts, more positive) than the cathode, connected to the conductive layer, for the OLED to work.

All content from Kiddle encyclopedia articles (including the article images and facts) can be freely used under Attribution-ShareAlike license, unless stated otherwise. Cite this article:
Organic light-emitting diode Facts for Kids. Kiddle Encyclopedia.