Wensleydale is a style of cheese originally produced in Wensleydale, North Yorkshire, England, but now mostly made in large commercial creameries throughout the United Kingdom. The term "Yorkshire Wensleydale" can only be used for cheese that is made in Wensleydale.

Wensleydale is a medium cheese that is supple and crumbly. It has a slight honey aroma.

The flavour of Wensleydale is suited to combination with sweeter produce, such as fruit like sweet apples. A popular combination available in many restaurants and delicatessens is cranberry Wensleydale, which contains cranberries in the cheese.

In Yorkshire, apple pie may be accompanied by white Wensleydale, giving rise to the saying 'an apple pie without the cheese is like a kiss without the squeeze'.

In Yorkshire and North East England it is often eaten with fruit cake or Christmas cake. 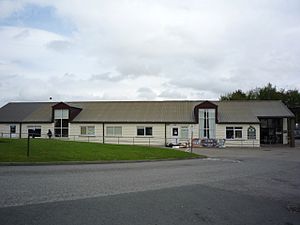 Wensleydale cheese was first made by French Cistercian monks from the Roquefort region, who had settled in Wensleydale. They built a monastery at Fors, but some years later the monks moved to Jervaulx in Lower Wensleydale. They brought with them a recipe for making cheese from sheep's milk. During the 14th century cows' milk began to be used instead, and the character of the cheese began to change. A little ewes' milk was still mixed in since it gave a more open texture, and allowed the development of the blue mould. At that time, Wensleydale was almost always blue with the white variety almost unknown. Nowadays, the opposite is true, with blue Wensleydale rarely seen. When the monastery was dissolved in 1540, the local farmers continued making the cheese until the Second World War, during which most milk in the country was used for the making of "Government Cheddar". Even after rationing ceased in 1954, cheese making did not return to pre-war levels.

The first creamery to produce Wensleydale commercially was established in 1897 in the town of Hawes. Wensleydale Dairy Products, who bought the Wensleydale Creamery in 1992, sought to protect the name Yorkshire Wensleydale under an EU regulation; PGI status was awarded in 2013.

All content from Kiddle encyclopedia articles (including the article images and facts) can be freely used under Attribution-ShareAlike license, unless stated otherwise. Cite this article:
Wensleydale cheese Facts for Kids. Kiddle Encyclopedia.