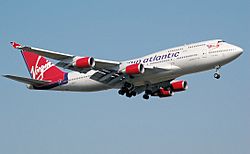 It was founded by British businessman Sir Richard Branson in the 1980s.

Virgin Atlantic has partners. Here is a list of them: 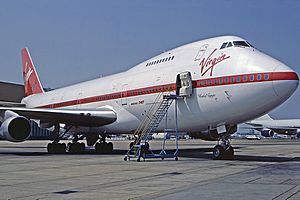 Economy class is the standard class on Virgin Atlantic aircraft. It is the cheapest part of the plane to travel in. Passengers usually get a free meal, some drinks and a bag with gifts in like a toothbrush. The seats in this class have a maximum pitch of 31 in, but this depends on what plane the passenger goes in.

Passengers that use Premium Economy have their own check-in area. They get to get on the plane before Economy passengers and a drink before the flight. They get a better seat and a special cabin crew. The seat it wider and more distance from the seat in front of it.

In November 2006, Virgin made a new seat. It is wider than the old one and has a plug for laptops. It is being put on all planes and now, all Airbus A340s and all Boeing 747s that fly from London Heathrow Airport have the new seats.

Upper Class is the name for Virgin Atlantic's business class. They do not have a first class service. Virgin says the seats are the biggest lie flat beds on any business class (it is 202 cm long and 84 cm wide), but Air Canada and Singapore Airlines have said this too. The seats have plugs for laptops and iPods. 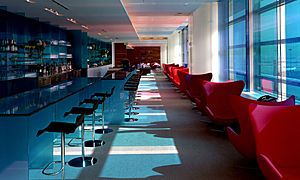 Upper Class passengers can also have their own chauffeur, drive-thru check-in, their own security points at some airports, access to the Virgin Clubhouse (a special VIP area, with a bar and seats), a larger menu for in-flight meals and a bar that passengers can stand up or sit down at in flight.

All the seats on all the aircraft have screens in the back of the seats to provide entertainment for passengers. Most planes have a newer system where the passengers can choose what they want to watch called V:Port. Older systems called "Odyssey" and "Super Nova" just offer different channels for the passengers to pick from. The screens on the older systems are also smaller. Virgin was among the first airlines to have games on its personal screens.

All content from Kiddle encyclopedia articles (including the article images and facts) can be freely used under Attribution-ShareAlike license, unless stated otherwise. Cite this article:
Virgin Atlantic Airways Facts for Kids. Kiddle Encyclopedia.