The town is adjacent to the Chiltern Hills Area of Outstanding Natural Beauty and has a wide area of Georgian, neo-Georgian and Tudor revival high street architecture, known as the Old Town. It is celebrated for the first model village in the world and, in education, a direction and technical production institute, the National Film and Television School.

The parish comprises Beaconsfield town and land mainly given over arable land. Some beech forest remains to supply an established beech furniture industry in High Wycombe, the making of modal and various artisan uses.

Beaconsfield is recorded in property returns of 1185 where it is spelt Bekenesfeld, literally beechen field which would less archaically be read as 'clearing in the beeches'. Nearby Burnham Beeches is a forest named after the beech genus.

The parish church at the crossroads of Old Beaconsfield is dedicated to St Mary, it was rebuilt of flint and bath stone by the Victorians in 1869. The United Reformed Church in Beaconsfield can trace its roots of non-conformist worship in the town back to 1704. Old Beaconsfield has a number of old coaching inns along a wide street of red brick houses and small shops. It was the first (coach) stopping point on the road between London and Oxford.

An annual fair is traditionally held on 10 May. Its charter, dating from 1269 even though the fair has been going for over 735 years.

In the Victorian era the town was the home constituency of Benjamin Disraeli, Prime Minister of the United Kingdom in 1868 and then again from 1874 until 1880 (in fact his home, Hughenden Manor is in the nearby town of High Wycombe). In 1876 he was made the 1st Earl of Beaconsfield by Queen Victoria with whom he was very popular. It was due to this, that Beaconsfield became a popular road name in industrial cities across the country in the late Victorian era.

It is the burial place of the author G. K. Chesterton, Edmund Burke and the poet Edmund Waller, for whom a tall stone obelisk was erected over the tomb chest in St Mary and All Saints churchyard. 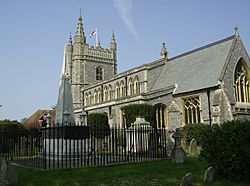 St Mary and All Saints Church, Beaconsfield and the tomb of Edmund Waller

In 1624, Waller's family acquired Wilton Manor and Hall Barn in the town. "The Wallers, who came from Speldhurst, Kent," says the Victoria County history of Buckinghamshire, "were settled at Beaconsfield as early as the 14th century."

Dominic Grieve is the Member of Parliament for Beaconsfield, first elected in 1997, and the former Attorney General. Tony Blair, former Prime Minister of the United Kingdom famously contested the seat in a by-election in 1982 and lost to Tim Smith, who with Neil Hamilton took part in the cash-for-questions affair which was the financial part of the Major ministry sleaze uncovered before the United Kingdom general election, 1997.

Beaconsfield is the home of Bekonscot model village, which was the first model village in the world; and Beaconsfield Film Studios becoming the National Film and Television School, where many film directors and technicians have learned their craft. It is the birthplace of Terry Pratchett, author of the Discworld series of fantasy novels. Several scenes in Brief Encounter, a classic film about a woman in a dull middle class marriage who almost undertakes an affair, were filmed in the town: Station Parade served as Milford High Street and Boots on Burke's Parade was where Alec runs into Laura. The exterior of the Royal Saracens Head Inn can be seen in the James Bond film Thunderball, and the interior shots for the pub in Hot Fuzz were filmed in the Royal Standard pub. The New Town also features in two other postwar colour films, John & Julie and The Fast Lady. Many other parts of the town have been used in films due to the old film studio and nearby Pinewood Studios. More recently it has often been used as a "location" for the TV murder mystery series, Midsomer Murders and the Inspector Morse spinoff Lewis. 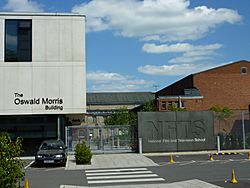 Beaconsfield Film Studios in 2011: as NFTS

The New Town was built 1 mile further to the north, when the railway arrived, at the turn of the 20th century. The railway station is on the Chiltern Main Line out of Marylebone towards High Wycombe it then branches to Aylesbury, and Birmingham Snow Hill. Old Beaconsfield which grew up on the Oxford Road in part to serve the coach traffic, is mirrored by New Beaconsfield which has grown up round the station.

Dr Liam Fox was a GP here before being elected to Parliament.

Local pop band The Hit Parade released their single "On The Road To Beaconsfield", a celebration of Enid Blyton and her life in the town, in 1994.

Beaconsfield was named 'Britain's richest town' (based on an average house price of £684,474) by The Daily Telegraph in 2008. In 2011 the post town had the highest proportion in the UK of £1 million-plus homes for sale (at 47%, compared to 3.5% nationally). In 2011, Burkes Road was named as the second most expensive road in the country outside London.

The M40 runs very close to the town with its eponymous Junction 2 on the parish boundary and is 4 lanes wide in either direction (junctions 1 to 3). Junction 2 is home to Beaconsfield motorway services. Local roads include the A355 which connects Amersham and Slough via Beaconsfield. The A40 parallels the M40 from London to Oxford and for years was the main road between the two cities as its precursor. The B474 connects the town to Hazlemere.

Rail links generally run close to the motorway. Beaconsfield railway station sees services to Birmingham Snow Hill and Moor Street, and London Marylebone. The line's trains have decades-settled fast and slow services, the former currently reaching London in around twenty five minutes. It has a car park as a minor park and ride station for mixed-mode commuters far from railway stations who drive towards the capital along the M40, smaller than Didcot Parkway railway station.

All content from Kiddle encyclopedia articles (including the article images and facts) can be freely used under Attribution-ShareAlike license, unless stated otherwise. Cite this article:
Beaconsfield Facts for Kids. Kiddle Encyclopedia.