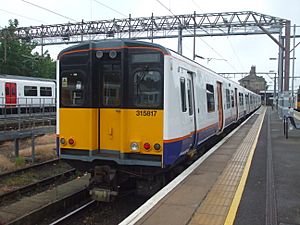 The Lea Valley lines are two commuter lines and two branches in North East London. They run along the valley of the River Lea. They were part of the Great Eastern Railway and they are now part of the Anglia Route of Network Rail.

All content from Kiddle encyclopedia articles (including the article images and facts) can be freely used under Attribution-ShareAlike license, unless stated otherwise. Cite this article:
Lea Valley lines Facts for Kids. Kiddle Encyclopedia.