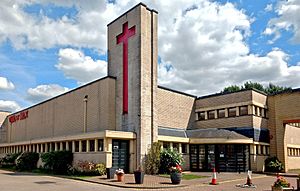 It was founded in 1930 by Dom Constantine Bosschaerts, formerly a monk of the Belgian Province of the Cassinese Congregation of the Primitive Observance. The building is dated to 1940 and its design credited to Bosschaerts in Pevsner.

Part of the building was later the Benedictine Centre for Spirituality, and is now the Cockfosters Spirituality Centre.

The parish church of the Parish of Christ The King in Cockfosters occupies part of the building which was intended to form the parish hall for a larger church. Since 2014 the parish has been administered by the Chemin Neuf Community.

All content from Kiddle encyclopedia articles (including the article images and facts) can be freely used under Attribution-ShareAlike license, unless stated otherwise. Cite this article:
Christ the King, Cockfosters Facts for Kids. Kiddle Encyclopedia.