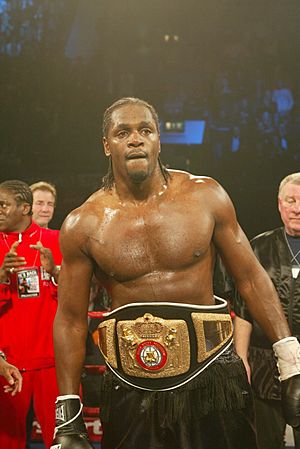 Harrison was born and raised in London. As a Super Heavyweight, he won two gold medals: one at the 1998 Commonwealth Games in Kuala Lumpur and another at the 2000 Summer Olympics in Sydney. He was the European Boxing Union Heavyweight Champion from 9 April - 8 June 2010.

Harrison was a contestant in the 2011 series of Strictly Come Dancing. He is a housemate in the August-September 2014 series of Celebrity Big Brother.

All content from Kiddle encyclopedia articles (including the article images and facts) can be freely used under Attribution-ShareAlike license, unless stated otherwise. Cite this article:
Audley Harrison Facts for Kids. Kiddle Encyclopedia.