Boardwalk Hall contains the world's largest musical instrument, a pipe organ of over 33,000 pipes, eight chambers, its console the world's largest of seven manuals and over 1000 stop keys, and one of two 64-foot stops (the other found in the Sydney Town Hall). Also included in this organ are pipes operating on 100 inches of pressure, the Grand Ophicleide being the loudest and also most famous. The Guinness Book of World Records states the following "... a pure trumpet note of ear-splitting volume, six times louder than the loudest train whistle." However, these stops are actually well-refined and are not overpowering in Boardwalk Hall due to its huge interior.

In October 2017, The state Senate approved legislation to dedicate Atlantic City's Boardwalk Hall in honor of Senator Jim Whelan, the former mayor and state lawmaker who died earlier in the year.

Edward L. Bader, mayor of Atlantic City from 1924–1929, led the initiative to acquire the land for Convention Hall, now Boardwalk Hall, and construction was underway at the time of his death. The hall, designed by the architectural firm Lockwood Greene, was built in 1926.

The main hall measures 456 by 310 feet (139 by 94 m). The barrel vault ceiling is 137 feet (42 m) high. Ten pairs of three-hinged steel trusses support this unusually large clear span; there are no supporting columns. Each pair of trusses spans 350 feet (110 m) and weighs 220 short tons (200 t). The trusses are tied to the frame columns to allow the building to flex slightly with wind and ground pressure. The barrel ceiling consists of painted aluminum tiles. It is decorated to resemble Roman bath tiles, and extends over 196,000 square feet (18,200 m2). 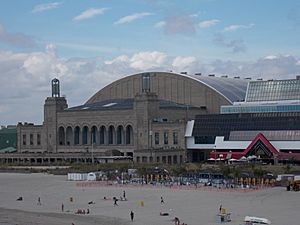 It was also the venue for the August 1964 Democratic National Convention that nominated U.S. President Lyndon B. Johnson as the Democratic Party's candidate for the 1964 U.S. presidential election, nine months after the assassination of his predecessor, John F. Kennedy, in November 1963.

The following weekend, The Beatles held one of their largest concerts on their first U.S. tour at the hall.

Judy Garland gave a concert at Convention Hall on August 4, 1961. Garland returned for a second engagement on Sept 3rd, 1961

The hall was also the venue for the concert by The Rolling Stones on their Steel Wheels Tour in 1989. The concert, which was shown on pay-per-view television, is widely remembered by fans for a mishap where viewers were cut off from the performance during the song "(I Can't Get No) Satisfaction", as well as the performance of "Miss You" in some countries. This concert was remastered, remixed and released on DVD, Blu-Ray, CD and Vinyl on 2 October, 2020, as Steel Wheels Live Atlantic City, New Jersey '89.

On March 7, 2003, Bruce Springsteen and the E Street Band performed. Tickets for the event were immediately sold-out. Springsteen returned to perform a solo show on his Devils & Dust Tour on November 13, 2005.

On August 16, 2003 Justin Timberlake and Christina Aguilera were supposed to perform at the Boardwalk Hall, but due to a major stage collapse, the show (and later tour) was postponed.

On February 4, 2006, Bon Jovi from New Jersey performed for the Have a Nice Day Tour.

Phish played three nights at Boardwalk Hall for Halloween in both 2010 and 2013. The 2010 Halloween concert featured a performance of Little Feat's Waiting For Columbus album in its entirety. The 2013 show included the debut of Phish's unrecorded album Wingsuit, which would later become the album Fuego.

Jennifer Lopez performed a sold-out show in front of 11,220 people during her Dance Again World Tour on July 29, 2012

Britney Spears performed a sold-out show in December 2001, and again for her Femme Fatale Tour on August 6, 2011.

Lady Gaga was scheduled to perform here on March 2, 2013 for her Born This Way Ball, but the show was later cancelled due to a hip injury which required surgery. She has previously performed at the arena on July 4, 2010 and February 19, 2011 as a part of her Monster Ball Tour. She performed a sold-out show on June 28, 2014 for her Artrave: The Artpop Ball Tour.

Beyoncé performed at the venue for the first time on The Mrs. Carter Show World Tour. The show sold out within its first few days of sales and took place on July 26, 2013.

Journey and Rascal Flatts made a stop at the hall for one-night shows, performing separately.

On June 8, 2019, Twenty One Pilots performed at the hall for their Bandito Tour.

In September 2007, it was the venue for the Kelly Pavlik – Jermain Taylor boxing match for the World Boxing Council, World Boxing Organization and The Ring magazine's middleweight championships.

On December 12, 1965, the New York Ukrainians defeated Philadelphia Ukrainian Nationals 3-2 in the first regulation indoor soccer match at the Convention Hall before more than 3,000 spectators.

Prior to 1973, the NCAA was divided into two divisions, University and College. Boardwalk Hall hosted bowl games in both divisions; the University Division later became NCAA Division I, while the College Division became Division II and Division III.

In 1959, A. F. "Bud" Dudley, a former Villanova University athletic director, created the Liberty Bowl, an annual post-season college-football bowl game in Philadelphia, Pennsylvania. The game was played at Philadelphia Municipal Stadium, but as the only cold-weather bowl game, it was plagued by poor attendance. A group of Atlantic City businessmen convinced Dudley to move his game from Philadelphia to Boardwalk Hall for 1964 and guaranteed Dudley $25,000.

The 1964 Liberty Bowl was the first major (University Division) collegiate bowl game played indoors and was also the first indoor football game broadcast nationwide on U.S. television. Since artificial turf was still in its developmental stages and was unavailable for the game, the hall was equipped with a four-inch-thick grass surface with two inches of burlap underneath it (as padding) on top of concrete. To keep the grass growing, artificial lighting was installed and kept on 24 hours a day. The entire process cost about $16,000. End zones were only eight yards long instead of the usual ten yards.

6,059 fans saw the Utah Utes rout the West Virginia Mountaineers, 32–6. Dudley was paid $25,000 from Atlantic City businessmen, $60,000 from ticket sales, and $95,000 from television revenues, for a $10,000 net profit. This would be the only time the game was played in Atlantic City, as Dudley moved it the following year to Memphis, Tennessee, where it remains to this day.

Boardwalk Hall was also the venue of the former Boardwalk Bowl post-season game from 1961 to 1973. From 1961 through 1967, the games were the "Little Army-Navy Game", featuring the College Division's Pennsylvania Military College and the Merchant Marine Academy. From 1968 through 1972, the bowl was the East regional final for the College Division; Delaware won four times, and Massachusetts won once. The final playing of the bowl was in 1973, as a Division II quarterfinal; Grambling defeated Delaware.

In 2004, it was the home of the Atlantic City CardSharks, a professional indoor football team that played a single season in the National Indoor Football League. They finished the regular season in second place for their division with a 9–5 record and lost in the wild card round of the playoffs to the Lexington Horsemen 54–25.

On May 30, 2015, the venue hosted the Philadelphia Soul and Las Vegas Outlaws for the venue's first Arena Football League (AFL) game. The Soul won 51–43 with an attendance of 6,514.

In 2019, the AFL added the Atlantic City Blackjacks with home games at Boardwalk Hall. They finished their inaugural season 4–8 and the entire AFL ceased operations at the end of the season.

The Syracuse Nationals and the Philadelphia Warriors played a regular season game at the arena on December 29, 1949. The game was part of a double header. The opening game was an exhibition basketball game between selected players of the Philadelphia Eagles and the Washington Redskins.

From 2007 through 2012, the Atlantic 10 Conference held its men's basketball championship at Boardwalk Hall. The 2013 tournament was held at the Barclays Center in Brooklyn, New York.

The Brooklyn Nets and the Philadelphia 76ers played a preseason game at the arena on October 13, 2012.

In 2018, the Metro Atlantic Athletic Conference announced its men's and women's basketball tournaments will be held at Boardwalk Hall from 2020 through 2022.

It played host to the Atlantic City Boardwalk Bullies, an ice-hockey team, from 2001–2005. From 2011 to 2013, ECAC Hockey held its men's ice hockey championship at Boardwalk Hall.

Despite not having a team in Atlantic City, the American Hockey League hosted the 2012 All-Star Classic at Boardwalk Hall. 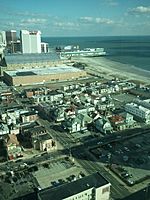 In 1995, the Hall was used for Monica Seles's return to tennis after she had been stabbed in 1993. It was a straight-sets victory over Martina Navratilova.

The Hall hosted the World Wrestling Entertainment's WrestleMania IV and V in 1988 and 1989, respectively, although on the television coverage it was referred to as "Trump Plaza" because the adjacent casino hotel was the primary sponsor (though in the opening to WM4 celebrity guest Bob Uecker does refer to the building as the 'convention center'). WrestleMania IV was attended by 18,165 fans while WrestleMania V had an attendance of 18,946 putting the respective shows 23rd and 20th on the all-time WrestleMania attendances (out of 31 as of 2016[update]).

Many WWE shows have also been held with both WWE Raw and WWE SmackDown making appearances. Referred to as the Atlantic City Convention Center during the WrestleMania broadcasts, it is the only venue to host the annual pay-per-view event in consecutive years.

The PBR hosted a Built Ford Tough Series bull riding event at Boardwalk Hall during the 2003 and 2018 seasons.

The 2005 edition of the Skate America figure skating competition was held at Boardwalk Hall.

Midget car racing events have been held at the Boardwalk Hall since 1938. Since 2003 it hosts the Atlantic City Indoor Races, a round of the Indoor Auto Racing Championship Series.

A $90-million restoration designed by EwingCole was completed in 2001 and received several awards, including the 2003 National Preservation Award and Building magazine's 2002 Modernization Award. The organ in the hall, which is the world's biggest, has been severely damaged in the process.

Constructed between May 1929 and December 1932, the Main Auditorium Organ is the "Poseidon" Midmer-Losh pipe organ, the world's-largest, as listed in The Guinness Book of World Records. The instrument has approximately 33,000 pipes and requires approximately 600 horsepower (450 kW) of blowers to operate. The condition of the organ deteriorated partly as a result of carelessness during hall renovation in 2001, and was no longer functional. However a repair program began in 2007, bringing the organ back to about 25% functionality by 2013.

Restoration efforts have been underway, originally overseen by the Atlantic City Convention Hall Organ Society, now renamed Boardwalk Pipes, initially funded by private donations and federal Save America's Treasures grants. The organ restoration is overseen by the Historic Organ Restoration Committee, a 501(c)3 nonprofit chartered by the state of New Jersey for the restoration and preservation of the two pipe organs of Historic Boardwalk Hall. With additional foundation and private funding, the committee forecasts completion of restoration in 2023.

The convention center is one of the only buildings surviving from Atlantic City's heyday as a seaside resort in the 1920s. It was an architectural and engineering triumph, its convention space providing the largest interior space with an unobstructed view at the time. It was recognized for its engineering as a Historic Civil Engineering Landmark in 1983, and as a U.S. National Historic Landmark in 1987.

Billboard magazine recognized Boardwalk Hall as the top-grossing mid-sized arena in the U.S. in 2003 and 2004. In 2003, The Ring magazine Fight of the Year was Gatti vs Ward which was hosted at the Hall.

All content from Kiddle encyclopedia articles (including the article images and facts) can be freely used under Attribution-ShareAlike license, unless stated otherwise. Cite this article:
Boardwalk Hall Facts for Kids. Kiddle Encyclopedia.