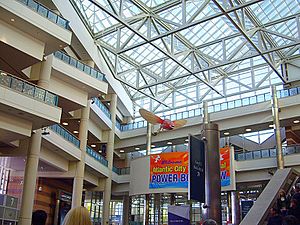 The Center was developed as a part of the city's gateway redevelopment project, which also included Tanger Outlets The Walk and the Grand Boulevard. The building opened with a connected Sheraton hotel.

The building was constructed in its original design by Philadelphia green city planning firm WRT (Wallace, Roberts and Todd) by its senior architect at the time, the principal, and partner, Gilbert Rosenthal, AIA, to reflect its location, featuring wave-inspired carpets and a Rock Bar themed to the beach. The main lobby is contained within an atrium lit by 90 ft. high skylights.

Between the convention center and the Sheraton Hotel is a landscaped garden with an interactive bronze statue of Bert Parks holding a crown. When a visitor puts their head inside the crown and taps it, sensors activate a recorded playback of Parks singing "There She Is..." through speakers hidden behind nearby bushes.

All content from Kiddle encyclopedia articles (including the article images and facts) can be freely used under Attribution-ShareAlike license, unless stated otherwise. Cite this article:
Atlantic City Convention Center Facts for Kids. Kiddle Encyclopedia.