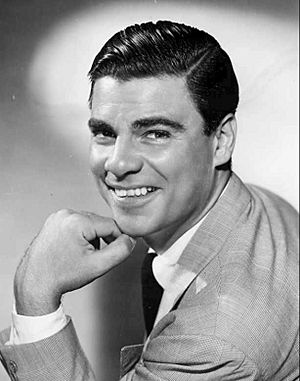 Bert Parks (born Bertram Jacobson; December 30, 1914 – February 2, 1992) was an American actor, singer, and radio and television announcer. He was best known for hosting the annual Miss America pageants from 1955 to 1979.

The first game show that Parks hosted was Party Line on NBC. Other games Parks hosted in early television included Stop the Music, Masquerade Party and the pilot for Hollywood Squares.

Parks was known for singing "There She Is, Miss America" to each new Miss America when he hosted the pageant.

Parks was born in Atlanta, Georgia to a Jewish family. He died from lung cancer near La Jolla, California at the age of seventy-seven.

All content from Kiddle encyclopedia articles (including the article images and facts) can be freely used under Attribution-ShareAlike license, unless stated otherwise. Cite this article:
Bert Parks Facts for Kids. Kiddle Encyclopedia.