Kids Encyclopedia Facts
This page is about the area of central London. For the hospital, see St James's University Hospital. For other uses, see Saint James (disambiguation).

St James's is a central district in the City of Westminster, London, forming part of the West End. In the 17th century the area developed as a residential location for the British aristocracy and around the 19th century was the focus of the development of gentlemen's clubs. Anciently part of the parish of St Martin in the Fields, much of it formed the parish of St James from 1685 to 1922. Since the Second World War the area has transitioned from residential to commercial use.

The St James name is derived from the dedication of a 12th-century leper hospital to Saint James the Less. The hospital site is now occupied by St James's Palace. The area became known as "Clubland" because of the historic presence of gentlemen's clubs.

St James's was once part of the same royal park as Green Park and St. James's Park. In the 1660s, Charles II gave the right to develop the area to Henry Jermyn, 1st Earl of St Albans, who developed it as a predominantly aristocratic residential area around a grid of streets centred on St James's Square. Until the Second World War, St James's remained one of the most exclusive residential enclaves in London. Notable residences include St James's Palace, Clarence House, Marlborough House, Lancaster House, Spencer House, Schomberg House, Norfolk House and Bridgewater House. 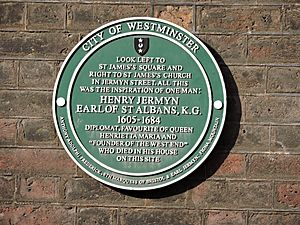 St James's is bounded to the north by Piccadilly, to the west by Green Park, to the south by The Mall and St. James's Park and to the east by Haymarket. 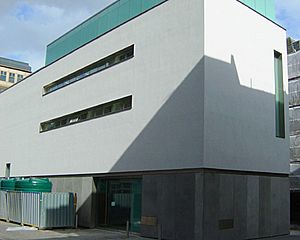 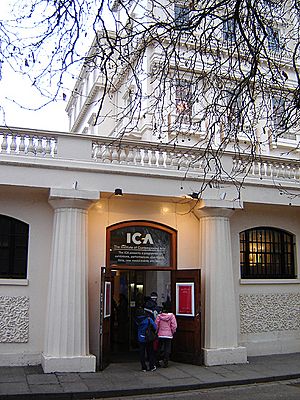 Art galleries catering for a spectrum of tastes occupy premises in the area. The White Cube gallery, which represents Damien Hirst and Tracey Emin, opened in Duke Street before moving to Hoxton Square. In September 2006, it opened a second gallery at 25–26 Mason's Yard, off Duke Street, on a plot previously occupied by an electricity substation. The gallery is the first free-standing building to be built in the area for more than 30 years.

On the southernmost border of St James's is The Mall where The Institute of Contemporary Arts and the Mall Galleries are located.

St James's is home to many of the best known gentlemen's clubs in London, and sometimes, though not as often as formerly, referred to as "Clubland". The clubs are organisations of English high society. A variety of groups congregate here, such as royals, military officers, motoring enthusiasts, and other groups. In 1990, the Carlton Club, traditional meeting place for members of the Conservative Party, was struck by an IRA bomb.

All content from Kiddle encyclopedia articles (including the article images and facts) can be freely used under Attribution-ShareAlike license, unless stated otherwise. Cite this article:
St James's Facts for Kids. Kiddle Encyclopedia.