The church is built of red brick with Portland stone dressings. Its interior has galleries on three sides supported by square pillars and the nave has a barrel vault supported by Corinthian columns. The carved marble font and limewood reredos are both notable examples of the work of Grinling Gibbons. In 1902, an outside pulpit was erected on the north wall of the church. It was designed by Temple Moore and carved by Laurence Arthur Turner. It was damaged in 1940, but restored at the same time as the rest of the fabric. 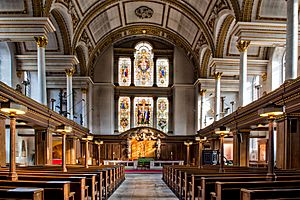 In 1662, Henry Jermyn, 1st Earl of St Albans, was granted land for residential development on what was then the outskirts of London. He set aside land for the building of a parish church and churchyard on the south side of what is now Piccadilly. Christopher Wren was appointed the architect in 1672 and the church was consecrated on 13 July 1684 by Henry Compton, the Bishop of London. In 1685 the parish of St James was created for the church.

The church was severely damaged by enemy action in the Blitz of London on 14 October 1940. After the war ended, specialist contractors, Rattee and Kett, of Cambridge, under the supervision of Messrs. W. F. Heslop and F. Brigmore, undertook restoration work, which was completed in 1954. Southwood Garden was created in the churchyard by Viscount Southwood after World War II as a garden of remembrance, "to commemorate the courage and fortitude of the people of London", and was opened by Queen Mary in 1946.

View looking southeast from the tower, showing many of the landmarks of London

Like many central London churches surrounded by commercial buildings and ever fewer local people, St James's lost numbers and momentum in the 1960s and 1970s. When, in 1980, Donald Reeves was offered the post of rector, the bishop allegedly said "I don't mind what you do, just keep it open." During that decade and most of the 1990s numbers and activity grew, the clergy and congregation gaining a reputation for being a progressive, liberal and campaigning church. That has continued. The "congregation" rejects that description and prefers "community". It is centred on the Eucharist, the celebration of the principal Christian sacrament. It finds expression in a wide range of interest groups: spiritual explorers, labyrinth walking, Julian prayer meetings, the Vagabonds group (a lively discussion group which takes its name from a William Blake poem and in faithfulness to that text meets in a local alehouse), an LGBT group and many others. The community has actively supported, and supports, the ordination of women to all the orders of the church, the just treatment of asylum seekers and those living in poverty. It celebrates what it regards as the "radical welcome" found in the heart of the Gospels and attested to by the Incarnation.

Concerts are regularly held in the church. Concerts have included performances by popular contemporary musicians such as R.E.M., the folk musician Laura Marling as part of her "church tour", the collegiate Indian-American music group Penn Masala and Devin Townsend on his 2015 UK acoustic tour. 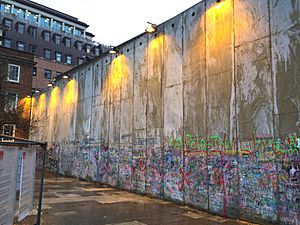 Replica section of the Israeli Security Wall, built in the church grounds, as part of the international protest against the Israeli wall.

Hauser & Wirth, a contemporary art gallery, is running a programme of outdoor sculpture exhibitions in Southwood Garden in the grounds of the church. The first exhibition was of work by the Swiss sculptor Hans Josephsohn, running from September 2009 to January 2010.

From 23 December 2013 to 5 January 2014 the "Bethlehem Unwrapped" demonstration against the Israeli West Bank barrier featured an art installation by Justin Butcher, Geof Thompson, and Dean Willars, which included a large replica section of the wall. The installation blocked the view of the church, other than a section of the top of the tower, which was stated by church authorities to be part of the point of the demonstration. 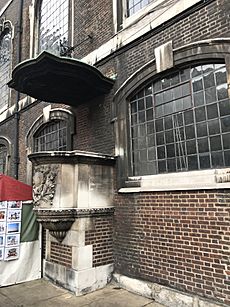 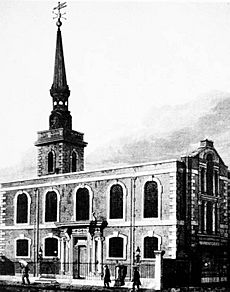 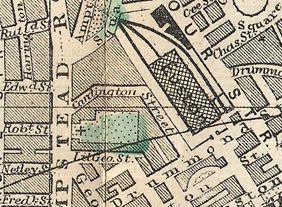 A separate burial ground of St James's Church was developed in Camden, in use from 1790 until 1853. The cemetery became St James's Gardens in 1878 with only a few gravestones lining the edges of the park. Part of the Gardens, located between Hampstead Road and Euston railway station, was built over when Euston station was expanded in around 1887. To avoid public outcry, the affected remains were reinterred at St Pancras Cemetery. The Gardens were closed to the public in 2017 to allow the further expansion of Euston station for the High Speed 2 (HS2) rail project. As of January 2019, archaeologists working on HS2 were excavating approximately 40,000 burials, with excavations due to continue until late 2020. It is proposed to re-bury the remains, at a site to be decided, after they have been examined by osteo-archaeologists.

All content from Kiddle encyclopedia articles (including the article images and facts) can be freely used under Attribution-ShareAlike license, unless stated otherwise. Cite this article:
St James's Church, Piccadilly Facts for Kids. Kiddle Encyclopedia.