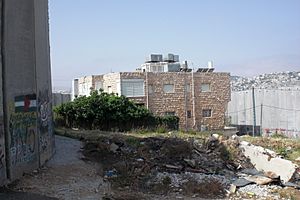 A Palestinian house in Bethlehem, surrounded by the barrier on three sides

Israel-West-Bank barrier is a wall built by the State of Israel to separate Palestinian territories from Israel. It is built mostly of fences and in some places it is built of high concrete walls.

There are many arguments about the barrier. People who want the barrier say it is needed to protect Israeli civilians from Palestinian terrorism, including suicide bombing attacks. Since the barrier was built, the number of attacks has gone down.

People who are against the barrier say that it is against international law because Israel and the Palestinians have not agreed where the border between them should be. Israel has built the barrier without consensus. This will make talks about deciding the borders more difficult.

All content from Kiddle encyclopedia articles (including the article images and facts) can be freely used under Attribution-ShareAlike license, unless stated otherwise. Cite this article:
Israeli West Bank barrier Facts for Kids. Kiddle Encyclopedia.