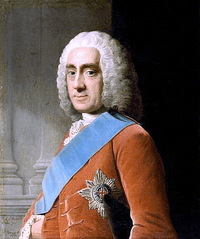 Stanhope was born in London. He got his schooling at Trinity Hall, Cambridge. After that, he went on the Grand Tour of the continent. He became gentleman of the bedchamber to the Prince of Wales.

In 1715 he entered the House of Commons as Lord Stanhope of Shelford and member for St Germans. He left for Paris and sent the government valuable information about the Jacobite plot. In 1716 he returned to Britain and sat in the House of Commons. He liked to take part in the debates.

He took his seat in the House of Lords. In 1728 he was sent to the Hague as ambassador. He did a good job, and got the Order of the Garter in 1730, and the position of Lord Steward. After he did not support Walpole's Excise Bill, he was dismissed from his stewardship. He spent years opposing the ruling party in the House of Lords. First against Robert Walpole and then against King George II of England. In 1744, the "Broad Bottom" party, led by Chesterfield and Pitt, came into office. They ruled together with the Pelhams.

He was then sent to the Hague as ambassador a second time. The object of his mission was to persuade the Dutch to join in the War of the Austrian Succession. His mission was successful. When he got back to London, he was made Lord-Lieutenancy of Ireland. This was a position he wanted for a long time.

He took the his role seriously. He established schools and manufacturing in Ireland. In politics, he found a way to work with both Protestant and Roman Catholic parties.

He also still took his seat in the Upper House. In 1751 he helped in making the Gregorian calendar a fact. That Act of Parliament is sometimes known as Chesterfield's Act. After he slowly became deaf, he had to stop his work in the parliament.

He lived for some years at the Ranger's House, Chesterfield Walk, Greenwich, London.

How he is remembered

In politics, he is best known for the time he was Lord Lieutenant of Ireland. As a writer, he is best known for his Letters to his Son. Those letters were not really written to be read by the general public. His widow Eugenia Stanhope first published them in 1774. Letters to his Godson was published in 1890. Both sets of letters are written with great style and knowledge.

Things he has probably said:

"An able man shows his spirit by gentle words and resolute actions."

All content from Kiddle encyclopedia articles (including the article images and facts) can be freely used under Attribution-ShareAlike license, unless stated otherwise. Cite this article:
Philip Stanhope, 4th Earl of Chesterfield Facts for Kids. Kiddle Encyclopedia.