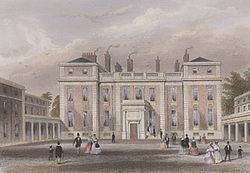 This view of the entrance front published in the 1850s before Pennethorne's additions shows an additional storey on the wings. The wings later gained a fourth main storey, and the central section gained a third.

Marlborough House is a mansion in Westminster, London, England. It was built for a royal favourite, Sarah Churchill, Duchess of Marlborough, in 1711. Following her death, it passed to the hands of successive Dukes of Marlborough.

In 1817, it became Crown property. It was used by members of the royal family, including Queen Adelaide. It served as a base for the predecessor of the Royal College of Art, the "National Art Training School". In 1861, Marlborough House was made the Prince of Wales's London residence. It was used by him for the next 40 years, until he became king in 1901. It continued as a royal residence, and was last used by Queen Mary until 1953. After her death, her granddaughter, Queen Elizabeth II, gave the house to the Commonwealth Secretariat, which continues to use it today.

All content from Kiddle encyclopedia articles (including the article images and facts) can be freely used under Attribution-ShareAlike license, unless stated otherwise. Cite this article:
Marlborough House Facts for Kids. Kiddle Encyclopedia.