Knightsbridge is a residential and retail district in West London, south of Hyde Park. It is identified in the London Plan as one of two international retail centres in London, alongside the West End. 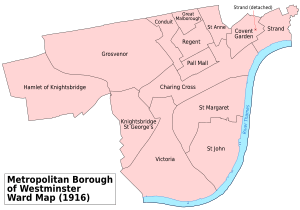 A map showing the Knightsbridge wards of Westminster Metropolitan Borough as they appeared in 1916.

Knightsbridge was a hamlet located primarily in the parish of St Margaret (detached) and partly in St Martin in the Fields (the part that later became St George Hanover Square). It also extended into the parishes of Kensington and Chelsea. It was therefore divided between local authorities from a very early time.

In the time of Edward I, the manor of Knightsbridge appertained to the abbey of Westminster. It was named after a crossing of the River Westbourne, which is now an underground river. It is recorded that the citizens of London met Matilda of England at the Knight's Bridge in 1141.

From 1885 to 1887, as a result of the opening of trade between Britain and the Far East, Humphreys' Hall in Knightsbridge hosted an exhibition of Japanese culture in a setting built to resemble a traditional Japanese village. The exhibition was very popular, with over 250,000 visitors during its early months. Japanese artisans illustrated "the manners, customs, and art-industries of their country, attired in their national and picturesque costumes. Magnificently decorated and illuminated Buddhist temple. Five o’clock tea in the Japanese tea-house. Japanese Musical and other Entertainments. Every-day Life as in Japan". W.S. Gilbert and his wife attended the exhibition, which is said to have inspired him to write The Mikado. When the Mikado requests of Ko-Ko the address of his son (Nanki-Poo) after Ko-Ko tells the Mikado that Nanki-Poo has "gone abroad," Ko-Ko replies that Nanki-Poo has gone to Knightsbridge.

Knightsbridge was historically known in Saxon and Old English as:

Knyghtesbrugg 1364, that is ‘bridge of the young men or retainers,’ from Old English cniht (genitive case plural –a) and brycg. The original bridge was where one of the old roads to the west that crossed the River Westbourne. The allusion may simply be to a place where cnihtas congregated: bridges and wells seem always to have been favourite gathering places of young people. However there is possibly a more specific reference to the important cnihtengild (‘guild of cnihtas‘) in 11th century London and to the limits of its jurisdiction (certainly Knightsbridge was one of the limits of the commercial jurisdiction of the City in the 12th century). Cniht in the pre Norman days did not have the status meaning of a minor noble, but simply described a horseman.

There are however other claims of the name's origins:

1. a duel between knights

2. according to a topographer named Norden, the bridge was locally known as ‘Stonebridge’ until a knight called Sir Knyvett was attacked while walking across the bridge late at night. The knight managed to better his attackers and ‘slew the master thief with his own hand’. This tale of Sir Knyvett’s valour supposedly gave a new name to the bridge.

3. a claim that the bridge may have been used by wealthy residents, the ‘knights and ladies’ rather than the common folk.

4. a claim that the area was used as a meeting place for local youths – where ‘knight’ was a slang term for ‘lad’. Even the original name of the area has come under scrutiny with some claiming it was called ‘Knightsbrigg’ while others believe it was ‘Kynesbrigg’.

Knightsbridge is east of Exhibition Road and west of Sloane Street. Brompton Road, Beauchamp Place and the western section of Pont Street serve roughly as its southern border together with their adjacent gardens and squares such as Ovington Square, Lennox Gardens and Cadogan Square. South of this area, the district fades into Chelsea while Belgravia lies to the east and South Kensington to the west.

To the north of the area, is the Hyde Park Barracks of the Household Cavalry, with a distinctive 33 storey tower by Sir Basil Spence. The Royalty and Diplomatic Protection Department is based in Walton Street. The Embassy of Libya is located at 15 Knightsbridge, the Embassy of France at no 58 and the Embassy of Kuwait at 2 Albert Gate, just off Knightsbridge.

It contains the Victoria and Albert Museum. On the religious side it contains the impressive Brompton Oratory (Catholic church, Brompton Road) and the CoE Holy Trinity Church behind it, a Church of Jesus Christ of Latter Day Saints in Exhibition Road, the Russian Orthodox Church in Ennismore Gardens, St Columba's Church of Scotland, Pont Street, and Deutsche Evangelische Christuskirche.

Knightsbridge takes its name from the road that runs along the south side of Hyde Park, west from Hyde Park Corner, spanning the City of Westminster and the Royal Borough of Kensington and Chelsea. Up to Brompton Road, it is a part of the A4 arterial road, while the remainder is part of the A315 road. West of Rutland Gardens, the road becomes Kensington Road.

All content from Kiddle encyclopedia articles (including the article images and facts) can be freely used under Attribution-ShareAlike license, unless stated otherwise. Cite this article:
Knightsbridge Facts for Kids. Kiddle Encyclopedia.